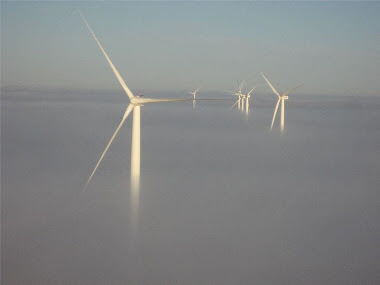 While following Midwestern renewable energy news lately could easily lead one to believe that it’s “all ethanol all the time” here in flyover country, tomorrow will be a banner day for another form of clean energy here in Missouri. At 10 am, various VIPs, including Senator Claire McCaskill, will gather to dedicate the Bluegrass Ridge wind farm, the first one in the state. Located north of King City, the wind farm started operation earlier this month, according to the Columbia Missourian. This is a particularly important development for Columbia (the home of the University of Missouri, Columbia), as citizens there approved a renewable energy standard of 2% by 2008 in 2004, and Bluegrass Ridge will help them meet (and probably exceed) that goal.

Bluegrass Ridge will be the first, but it’s not the only wind farm in the state slated to go online this year: “Conception wind farm and Cow Branch wind farm, are expected to be up and running by the end of the year,’ Associated Electric spokeswoman Nancy Southworth said.” AE is one of the developers of these installations; Wind Capital Group and John Deere Wind Energy are also involved. According to AWEA, still another wind farm in under construction: Loess Hills, near Rock Port.

Missouri doesn’t have the wind potential of many other states, particularly those to the west of us, but, according to the Missourian, economic factors, including volatile prices of natural gas, have come together to make harnessing that potential much more appealing to investors:

This marked the first year that Missouri had its own wind turbines. This is largely due to natural limitations. Missouri has considerably less wind than other states that produce wind energy, but better technology has finally made wind energy financially viable, especially in northwest Missouri, said Kerry Cordray, a spokesman for the Energy Center at Missouri’s Department of Natural Resources.

Wind’s contribution as an energy source will remain limited for now, because it’s an inconsistent resource. Wind, for example, typically blows the least during the summer, when demand for electricity is greatest.

“It’s important and will remain important, but it will also, for the foreseeable future, remain a supplemental resource,” Cordray said, but he emphasized that the industry expects to grow.

Wind power won’t be the answer for Missouri, but it’s very encouraging to see that both the state government and the business community recognize it can be a part of the mix here. Hopefully, this will lead investors to explore the potential of other renewable resources here in the state: solar and geothermal power, for instance, can both play a role in Missouri’s energy mix. In both of these cases, though, this potential won’t be harnessed through large, centralized power installations, but through home and business owners installing photovoltaic panels and geothermal heat pumps. The big power plant isn’t the only viable model anymore… let’s hope that investors big and small recognize that and take advantage of it.

This is good news for the state and the region. I’m looking forward to hearing more about the other wind farms under construction.