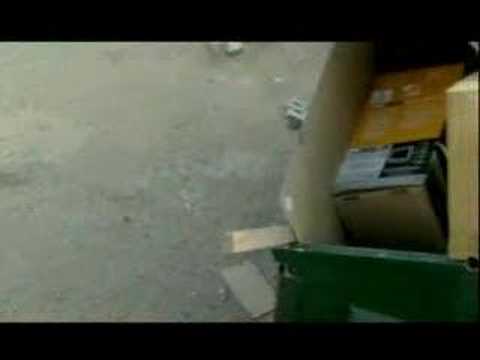 Fellow sustainablogger Robin Shreeves recently wrote a great and helpful post — Your Trash Just Doesn’t Disappear, Stupid! (Or How To Make Sure Useful Things Stay Out of Landfills) — that touches on a bit of a phenomenon that piques my interest: mongoing, freeganism, dumpster diving.

Pushing aside such an unfortunate view of human beings living, hopefully only temporarily, in such unfortunate circumstances, let’s look at what dumpster diving has become: environmentally friendly, if not downright urban chic.

Now, not to contradict Robin’s post that points out that stuff doesn’t just disappear; I wholeheartedly agree with her premise. But in my city, St. Louis, and I think in a number of others across the country, there is the possibility of that magical kick-it-to-the-curb and *poof,* it’s gone in the next day (or two or three), if what has been put out is re-useful.

Have a television that isn’t quite dead, but isn’t of need in your household? Go set it in the alley by the dumpster. Have some extra bookshelves? Put them by the dumpster. A broken, but fixable chair? Dumpster.

Before long, either a neighbor who likes to fix chairs or TVs will snag them up, or an early 1980s pickup truck overloaded with salvageable items and resourceful, if down-on-their-luck men, will rumble down the alley looking for goods to sell for scrap or to repair.

Freegans go for this strategy as a means of lifestyle that embraces sustainability and social consciousness, free of mainstream economics.

I have latched onto the occasional item I find by the dumpster in the alley behind my house for art projects or household utility. (I also acquire firewood the same way, by scavenging fallen limbs neighbors have cleared from their yards and put in the alley.) It’s a sort of neighborhood block swap meet with no official hours or structure.

But stocking the for-mongo shelves is only one option. As Robin suggested, Craigslist, Freecycle, Salvation Army, etc. are always good avenues. I try to be somewhat discerning in what I put out by the dumpster.

My rule of thumb has been to watch the stuff I put out there, and if it’s not been taken within a few days, then I need to reclaim it to dispose of it via other means. I’ve never had to reclaim anything.

And so the cycle of stuff-life continues.