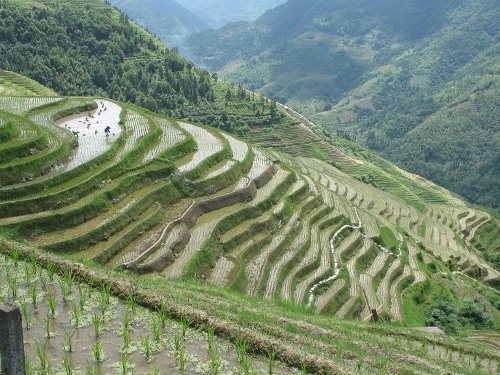 In one of my favorite movies, The Princess Bride, the character Inigo Montoya challenges Vizzini about his use of the word inconceivable:  “You keep using that word. I do not think it means what you think it means.”  I feel the same way about the term “monoculture.”

I’ve been noticing the increasingly frequent use of the term “monoculture” by people who are being critical of mainstream farming.  The term is thrown around as an epithet, particularly in comment streams, but I also see it being used by others in ways that suggest that it is becoming a part of the broader, negative, mythical narrative about agriculture.  I think it is worth considering what this term really means and how it corresponds to real world agriculture.

In the most extreme case, “monoculture” is a contrast with “polyculture.”  “Polyculture” describes systems where a given agricultural field is intentionally planted to more than one crop species.  Such systems actually exist, but almost only in subsistence farming systems that are extremely small scale and highly labor intensive.   This sort of inter-planting just makes no sense for first world agriculture for a host of reasons (equipment, harvest timing, nutrient needs, pest control…).

The History of “Monoculture”

“Monoculture” is not new.  The ancient Hebrew scriptures specifically prohibit planting fields with more than one crop (Leviticus 19:19).  Ancient farmers from the Fertile Crescent to China have always tried to limit a given field or paddy to one crop. The picture at the top of this post is from a 700+ year-old farming system in China that would qualify as a “monoculture.”   “Monoculture” is the wrong term for what the Food Movement wants to critique.

One of the most wise and basic farming practices is to “rotate crops.”  If a farmer plants a grass crop one year, a broadleaf crop the next, a different grass the next, etc. it tends to break pest cycles and to put different nutritional pressures on the soil. Actually, most of what people imagine as “Big Ag” or “Industrial Farming” actually involves rotated crops on family farms.  The rotation differs by geography.  In the heart of the Corn Belt there is usually a soybean/corn rotation with winter wheat in some areas.  In the Southeast, cotton, peanuts and wheat tend to be mixed in with the corn and soy rotation.  North and West of the Corn Belt wheat, sunflowers, sugar beets, canola are common rotation options.  These traditional rotations are employed on hundreds of millions of acres of US farmland.

When a farmer plants a vineyard or an orchard it only makes sense for it all to be the same crop.  There will also be many other plant species in the “row middles,” but for 20+ years, that land will be devoted to a single crop species.  There are other areas where only a single crop makes much sense.  That is true for wheat planted in low rainfall areas.  There are large areas of “continuous wheat” in Western North Datoka, Montana, Alberta or Eastern Washington where not much else could be grown.  Over time, those soils can actually become “suppressive” to some of the wheat pathogens in the soil. Even in these systems, farmers plant several different varieties of wheat to spread out their risk from diseases like Fusarium Head Scab.

A Better Term to Use

If someone is serious about a critique of modern agriculture, “monoculture” is not the best term to use – particularly if you want to communicate with farmers.  The real issue is the difference between “diverse rotations” and “non-diverse rotations.”

Where are “Non-Diverse Rotations” Common?

There are some areas in US agriculture where crop rotation is not being practiced to a degree that would be seemingly the right thing to do.  In the heart of the Corn Belt it would actually be good to mix more crops like wheat or oats or barley  into the corn/soybean rotation.  There are some areas where corn or soybeans tend to be planted nearly continuously in the same fields.  As an agricultural scientist it would be easy for me to join the “Food Movement” folks that demonize the growers that do this.  The difference is that I have met a lot of these growers and I understand the economic reasons behind their cropping decisions.

You Can’t Buy The Farm, But You Can Rent It

(an allusion to the musical, “Rent”)  If you look at the nature of farms in the areas that tend to have “non-diverse rotations” and periods of “continuous cropping,” the  farmers who still work there have expanded their farming operations primarily by renting land from the families that have historically left for non-farming jobs and/or the cities.  What was once a 100-640 acre family-owned farm has often become a 2-15,000 acre family farm with the new land rented from previous neighbors.  I’ve met with many of these growers over the years and their “office” is the kitchen table or an old desk in the corner of the tractor barn.  These are still absolutely “family farms” but they farm large areas under a new economic paradigm.

From a long-term economic point of view, diverse crop rotation is a great thing to do.  If you are a typical farmer in the heart of the Corn Belt, you rent land with no guarantee that you will be the one who rents it the next year.  You really can’t afford to plant wheat or barley or oats because your income/acre won’t cover the rent price that is based on what you could get from a corn or soybean crop.  So, if you are a rational business-person (which any long-term farmer must be), you have to plant only the crop(s) that make the most money in a given year and farm them in a way which optimizes single year income.  This is not ideal from a long-term perspective, but is economic reality.

So it turns out that the “limited rotational diversity” that is so widely critiqued by the “food movement” is more of an economic/structural issue.   “Monoculture” is not the best term to use here.  Neither is it rational to ignore the economic drivers involved or to lay the “blame” on farmers when thousands of non-farming land owners are part of the equation.  An enlightened land owner that took a long-term view would actually want their renter’s to do more diverse rotations and to make other investments in building up soil quality, but to make that happen the nature of leases would have to change and the landowner would have to participate in the risks and the investments to improve their asset.

“Dragon’s Back” image from Ben Savage

Looking for vegetarian goodies for the grill? Check out our current listings of veggie burgers, including Boca Burgers, and vegan sausage.