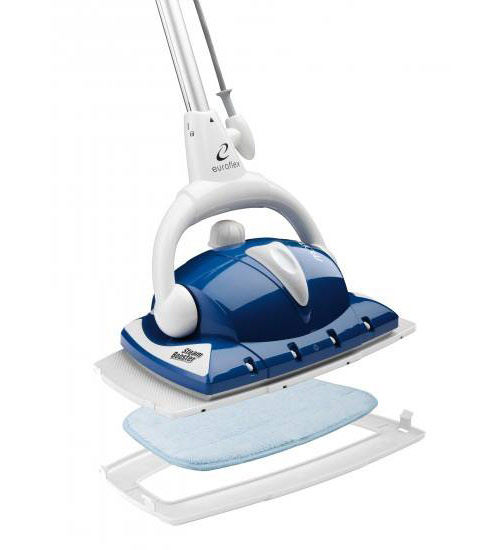 A couple of months ago, I proclaimed myself an “indoor air quality militant,” as my infant grandson would be coming to live with us after getting out of the hospital, and his delicate lungs required clean air. Well, he’s home, and we cleaned like crazy in preparation. While I didn’t quite reach the level of “militancy” I laid out in that post (other members of the household encouraged me to lighten up a bit), I have cut our use of some cleaning chemicals with a new Monster steam mop. Euroflex USA offered to give me a Monster EZ1XL Steam Jet to try out, and since I knew the little guy was coming home soon, I took them up on it.

Does a Steam Mop Really Do a Better Job than the Traditional Version?

Not according to Consumer Reports… but the floor of the new nursery didn’t need anything that could clean up “catsup, hair spray, toothpaste, pasta sauce, olive oil, cat food, pancake syrup, mustard, barbecue sauce, and other sticky household stuff” that had hardened overnight; it needed a mopping after a sweeping up and/or vacuuming to clean in between our 100+ year-old floorboards, and to get the last of any dust and germs that remained after that standard cleaning. I’d guess this is a bit more in line with how most folks use these appliances.

I was really happy with the job the EZ1XL did on the nursery floor – not sure how else to describe it other than “really, really clean.” There was a bit of a scent in the air – I’m guessing that may have come from residue of other cleaners we’ve used (primarily oil soap). As promised in sales literature, the floor was dry after cleaning: the steam mop creates a “dry steam” with its boiler technology, so no wiping up water afterwards.

I was also happy with the procedures for getting the mop ready to go: essentially pouring water into the boiler, plugging it in, and waiting for it to heat up (which I didn’t time, but the claim of “3 minutes” seems about right). The only problem I had with any of this was finding the mop a little difficult to push at first… but using the front-facing steam jets helped tremendously on this front.

So, is the Monster Steam Mop a “Green Product?”

I did do some digging around to see if I could find a comparison of steam mopping vs. traditional mopping in terms of environmental impact. I came up short: there’s definitely an “apples and oranges” element to comparing the two: steam mops use electricity and water, while regular mopping uses water and chemical compounds of some kind.

Still, I can make some observations. The amount of water I used for steam mopping the nursery floor was minimal: I filled the mop’s boiler once (which takes a maximum of 2 1/2 cups of water). So, I buy the “water-wise” claims made by the sales lit. Another claim: the boiler controls water heat thermostatically. So, as long as the water stays above the necessary temperature, the boiler isn’t running. That’s a big deal, as creating heat with electricity is pretty energy intensive. Finally, the steam mop pad washed up beautifully – I have no doubt I’ll be able to reuse it for quite some time.

There is a sanitizer compound that you can use with the mop, but I’m pretty satisfied with what I got from straight tap water. Given my objective of keeping the air in the nursery as fresh and clean as possible, that works for me.

The reviews I found on sales sites (Amazon, etc.) were also pretty positive. If you’ve used a EZ1XL, share your experience with us.