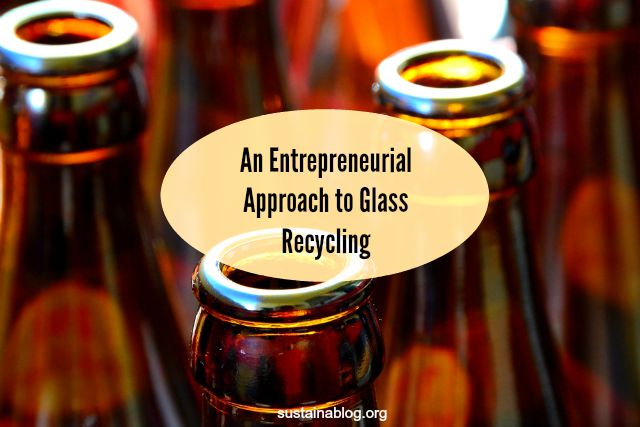 We Americans are doing much better in terms of recycling materials, according to a new article from Yes!: the EPA notes that we recycled 65 million tons of solid waste in 2013. We’re trying to do the right thing, but the economics of recycling follow the ebbs and flows of the market… and that means that many of those materials we send to the curb may not have a buyer these days. Glass (as we’ve noted before) has become particularly problematic: the price for it has sunk so low that it’s often not worth the cost of transporting it to a recycler.

In a small state like Montana, which doesn’t produce as high a volume of recyclable glass as other states, the issue becomes especially clear: glass recycling simply costs too much, so the state doesn’t do it (despite lots and lots of phone calls from angry residents). A group of craft brewers decided that they didn’t like the idea of the bottles that once held their beer heading for the landfill, so the decided to set up their own system. Missoula’s Bayern Brewery invested in an industrial bottle-washing machine that washes up to 5000 bottles at a time, readying them for reuse by Bayern and five other brewers in the state.

Yes, the machine was expensive: made in Germany, the Seitz industrial washing machine cost $300,000. And not all bottles can go in it: it only washes the 12 oz. size with no embossing on it.  But the savings in glass not sent to the landfill (and bottles not bought by the breweries) are pretty significant: in the three years that Red Lodge Ales has participated with the bottle washing plan, sales manager Doug Bailey estimates they’ve saved about 125,000 bottles.

This strikes me as a really common-sense approach to dealing with glass waste. Single-stream recycling – which is responsible for our growing recycling rates – is pretty hard on glass… and when a bottle shatters, it often contaminates other materials. Why not implement a private-public bottle deposit scheme in which deposit funds subsidize the reuse of glass bottles in this manner?

Got more thoughts on how these Montana brewers addressed the glass recycling issue? Share them with us in the comments…