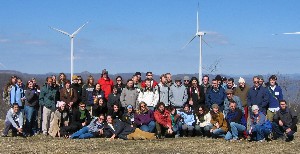 Apologies for being MIA the past couple of days — a combination of a busy work week, previous commitments (Bowling for Kids’ Sake last night), and an impromptu night out with the family. While I was gone, I missed several news items about colleges implementing renewable energy:

Five years ago, the student-led Renewable Energy Club (also known as “REC”) proposed that each student pay a $25 a year per student surcharge to support the use of renewable energy. The measure passed overwhelmingly and as a result has helped offset millions of pounds of greenhouse gas emissions. This latest purchase prevents the release of over 10 million pounds of greenhouse gasses from entering the atmostphere. This has the equivalent environmental benefit to removing 978 cars from U.S. roadways or planting 1281 acres of trees.

Connecticut College Vice President for Administration Ulysses Hammond said this continued initiative, which is a joint effort between students and administration, strengthens the college´s position as one of the most environmentally committed campuses in the country.

“Our purchase of renewable energy certificates reaffirms the College´s commitment to be a model for environmental sustainability,” Hammond said.

More than 150 student activists from the Carolinas, Kentucky, Alabama, Florida, Georgia, Virginia and Tennessee were attending, swapping stories of success and strategy.

“I would like to give testimony to the power and significance of this gathering,” said Brandon Armstrong from Middle Tennessee State University in Murfreesboro.

“It was at this conference last year that students from my school learned about the problems that we are going to have to deal with in this generation,” he said.

Mountaintop removal coal mining, global warming and the threat to public health from air pollutants all linked to “our dirty energy practices” and reliance on fossil fuels, he said.

“But most importantly,” Armstrong said, “it was here that we learned that there is something we can do about it.”

The council also unanimously passed “A Resolution to Institute a Renewable Energy Fee” that calls for the University to “commit to purchasing Renewable Energy Certificates as an immediate source of renewable energy.” The proposal endorses a $25 student fee to be paid each semester. The resolution cites a concern about global climate change and notes that renewable energy was not addressed in the University’s Plan for Strategic Growth.

Great news on all fronts! The prominence of sustainability measures like these on college campuses is a hopeful sign for a bright green future…