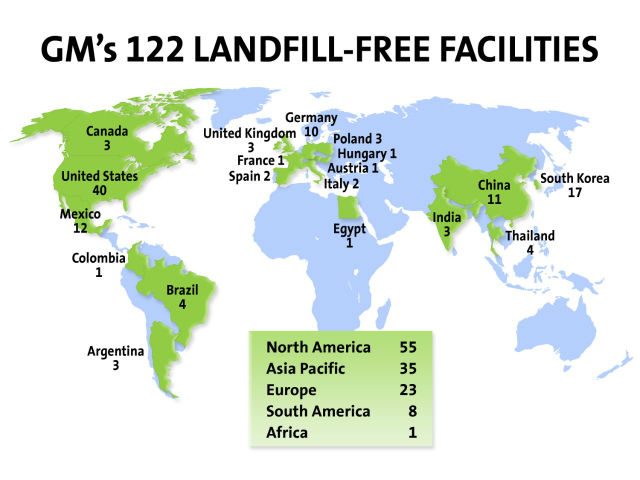 Last month, we joined sister site Gas 2.0 in congratulating Ford Canada on reaching landfill-free status for all of its operations. That’s pretty impressive, right – all of the factories in one country sending nothing to landfills? While I’ve wrestled with other ideas since then, another question struck me: how’s the competition doing on this front? Is GM, for instance, making similar strides in reducing its waste stream?

The short answer, I found out today, is a resounding “yes!” While I don’t know if the company has reached total landfill-free status in any of the countries that host multiple facilities (like Ford), I do know that General Motors has added 11 more operations to the landfill-free column… and that it has a total of 122 manufacturing and non-manufacturing locations around the world that send nothing to landfills.

OK, that’s really impressive! What I really enjoy digging into with these kinds of stories is the “how”: facilities in the developing world – or even in many parts of developed countries – can’t just call up the local recycling company and say “Come and get it!”… especially when “it” involves industrial chemicals of various configurations. Overall, these materials require specialized knowledge and nearby resources to handle them; more specifically, they require creative business thinking that will measurably lighten a company’s footprint without making investors feel like they’ve been ignored, or customers feel like they’re paying way too much for a company’s green initiatives.

Such thinking has to involve all possible means of handling waste, from reuse and recycling at the back end to reducing it at the front end. So, a facility like Spain’s Zaragoza Assembly composts wastewater treatment sludge, as well as reuses 80% of its paint solvent. Canada’s CAMI Assembly turns wood scrap into mulch for the facilities’ wetlands, while Grand Rapids Operations turns used grinding wheels into sandpaper. All of these collective efforts by the company worldwide contribute to a reduction of 600,000 metric tons of CO2-equivalent emissions. No doubt they’re saving massive volumes of landfill space, too, as well as reducing air, water, and soil contamination.

Car makers have really jumped on the landfill-free movement – I still remember those Subaru ads touting its Indiana plant – and, at least in terms of number of facilities, they’re making impressive strides. I’d love to see weight/volume numbers from GM: emissions equivalents are great, but it’s hard to get a picture of the amount of waste from them. Still, not only is this quite an accomplishment on its own, but it also puts them in a very good position to reach their goal of 125 landfill-free facilities by 2020… I think they’ll probably make it.

While I don’t know what organizations are certifying this status, I do know that GM has received numerous accolades for its initiatives to keep waste out of landfills. If you’ve got thoughts on any of this, do share…