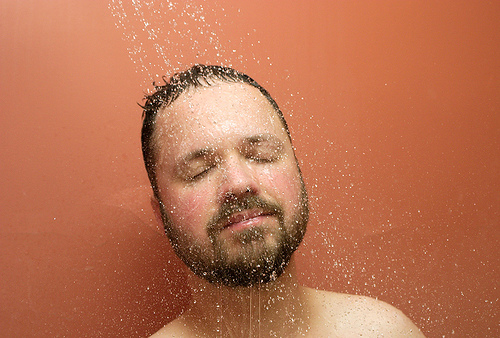 There are many great and pleasantly simple ways to conserve water usage at home. Want to save an extra 50+ gallons of water each and every day? Here’s one way you may not have considered before: take a navy shower! No, you don’t need to shout “yes, drill sergeant” or drop and do fifty push-ups at any point in this process. It’s actually one of the better ideas to come out of the military…

A navy shower is a method of showering that originated on ships at sea, where freshwater supplies were frequently in short supply. The idea is quite simple: Turn on the water and rinse, turn off the water and scrub down with soap, and then turn on the water once again to clean off the soap. Really, that’s it.

Instead of having the water run for the entire duration of the shower (which is ultimately very wasteful – you’ll be no cleaner for it, believe it or not!), the shower is on for a mere two to three minutes.

Need more convincing? Amazingly, the average 10 minute shower requires 60 gallons of water. That’s 240 gallons of water for a family of four, just to shower once each day! A navy shower, however, can use as little as 3 gallons! To make the argument even more convincing, this resourceful individual did the math to calculate how much money that simple change would save you.

Combined with a low flow showerhead, you’ll be on your way towards greater water conservation at home!