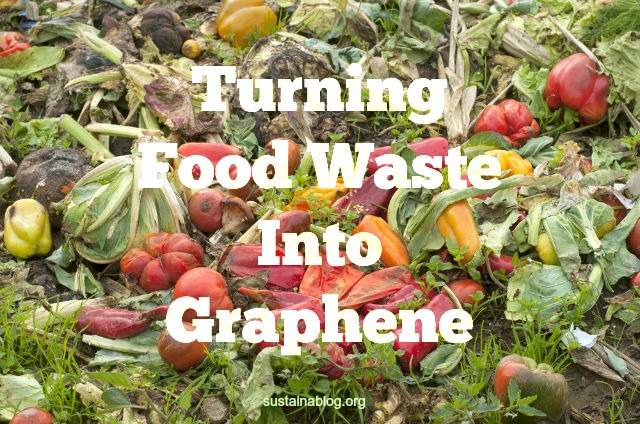 I’ve certainly seen many references to potential super material graphene over the past few years… but I haven’t really dug into them. But not only does this material have the potential to revolutionize the green economy, but it also could be produced from food waste. A new EU project, PlasCarb, is exploring the potential to create graphitic carbon (the basic material for graphene) and hydrogen from food headed for the landfill.

According to the project’s website, the extraction of these basic materials from food waste involves two processes: anaerobic digestion (which has all sorts of uses), and ” low energy microwave plasma,” which splits the biogas produced by the digester into the valuable components. The potential here is kind of staggering: PlasCarb tells The Guardian:

…95% of hydrogen currently comes from fossil fuels. And some bioplastics produced from crops such as corn are beginning to be deemed unsustainable. The belief is that there won’t be an endless supply of crops, but whether we like it or not, there will probably always be a high volume of discarded food. Growing materials from waste streams could also reduce concerns over how corn-based biopolymers may impact on crop prices, land availability and food shortages.

Of course, there are still challenges: scaling the process up to commercial levels, and creating affordable processes that allow businesses to take advantage of the technology. I’d add another: as with other methods of dealing with food waste, I’m concerned about sending edible food to the digester, rather than to people who can eat it. But with food waste that’s definitely past the point of eating, I’d love to see this become viable.

Graphene and hydrogen aren’t without their own challenges… but if we’re going to make use of these materials, this definitely seems like a preferable way to extract them. Got other concerns, or know of other interesting possibilities for food waste and anaerobic digestion? Share with us…