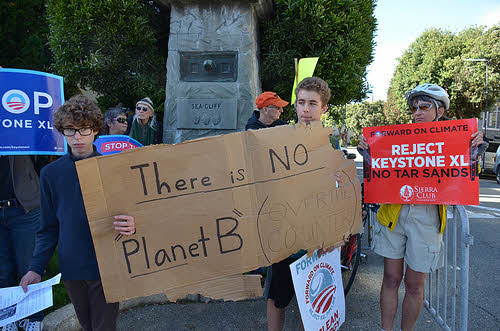 It’s been a rough year or so for the fossil fuels industry, what with exploding fracking wells, massive coal ash dumps, and oil spills from pipelines. That last one’s particularly important, as the Obama administration is still considering the approval of the Keystone XL Pipeline, which will run from the tar sands of Alberta, Canada, to the Texas Gulf Coast.

As you might imagine, supporters of the pipeline love to shout “Jobs!” really loudly, but as a new short film from the Center for Media & Democracy shows, that’s just one of the misleading ideas out there about this project. In truth, the Keystone XL Pipeline will only create 50 permanent jobs; others – less than 4000 – will be temporary construction jobs. This is just one of the industry talking points highlighted in “Keystone PipeLIES Exposed.”

Our friends at Desmogblog have reviewed the 23-minute film – you’ll find their thoughts, and the film itself, below. Spend some time watching and reading, and then let us know what you think: can we buy the claims being made for the pipeline project? If we can, are they worth the potential harm to environmental resources and private property?

Keystone PipeLIES Exposed: New Film from Center for Media and Democracy (via Desmogblog)

Wed, 2014-02-26 11:46Ben Jervey On Tuesday, the Center for Media and Democracy released a new short film that sets out to debunk the many false claims — the films calls them “pipeLIES” — used by promoters of the Keystone XL pipeline. These industry…