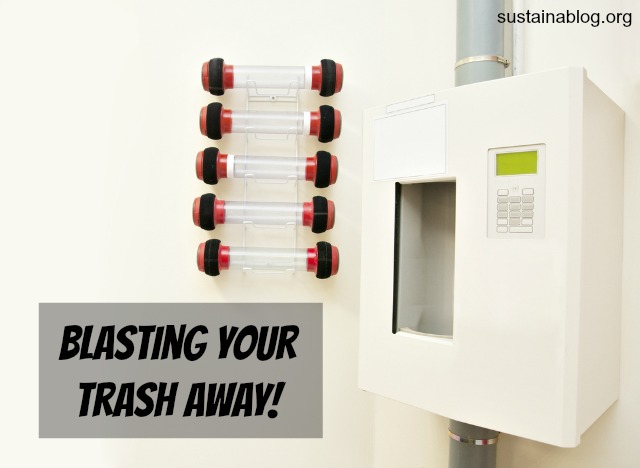 Back in college, I spent a semester working as a hospital pharmacy tech. While we made regular trips on foot to deliver prescriptions, IV bags, and other items, we also made use of a pneumatic tube system to send single items, or multiple light-weight things, immediately to a patient wing. At that point, this was kind of an old-school technology, but one that worked remarkably well: within seconds, the nurses would have the drugs or materials they needed.

I’m not sure I’ve seen such a system since – well, maybe in a movie portraying mid-20th century business operations – but they are still around. This week I learned that they’re still being installed, and that a pneumatic waste collection system may be the cutting edge for garbage and recycling disposal in urban environments. A new “eco-district” in Paris, Clichy-Batignolles, started using such a system at the beginning of the year.

Why would a new neighborhood based on ecological principles want to make use of such a system? Take a minute to think about how your trash and recycling is normally collected: trucks making rounds picking up either trash cans or dumpsters. Our regular system automatically involves fossil fuel consumption, and the emissions that go with it (except for a few places trying out electric trucks).

The pneumatic waste collection system eliminates much of the oil-powered collection: rather, residents of apartment buildings in the district deliver bags of waste to a central collection point in their buildings, and the materials are fed into the system. Different materials – organic waste, recyclables, mixed waste – each have separate inlets. The system moves the waste to a collection point in the city – a kilometer and a half, or just under a mile, away – where it’s compacted, and loaded onto trucks for its eventual destination. According to the eco-district’s site, “Pneumatic waste collection can reduce by 42% the emissions of greenhouse gases, 98% reduction in carbon monoxide, 86% of nitrogen oxide emissions and 90% particulate emissions.” Global Site Plans notes that such a system also costs less to operate after installation.

Apparently, such systems are in operation in other parts of Europe, and in Asia. While such systems don’t discourage creating trash, it doesn’t strike me that they encourage it, either – they’re no more convenient than the traditional system.

Have you used a pneumatic waste collection system? What did you think? No doubt you didn’t miss trash trucks banging cans around at godawful hours…

via Sustainable Cities Collective (disclaimer: I’m a member of their Board of Advisers)