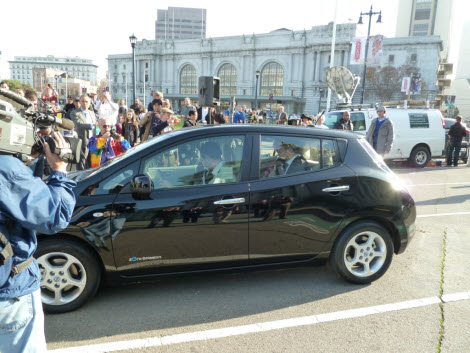 The recipient delivery was broadcast on Facebook.com and the LEAF owner is Olivier Chalouhi. Olivier is a San Francisco Bay Area resident and was the first person in the US to place a Nissan LEAF order.

Who Is This Guy?

Chalouhi, a 31-year-old entrepreneur is the founder of Fanhattan, a venture-backed stealth start-up in the connected TV space, where he serves as chief technology officer. He currently lives in Redwood City, Calif, with his wife, Jana, and their two children and holds a master’s degree in computer science from the French Aeronautical and Space School. Before purchasing his LEAF, Chalouhi commuted to work on an electric bicycle.

“Electricity is the new fuel for cars, and the Nissan LEAF has the potential to transform the automotive industry and the way people drive,” said Carlos Tavares, Chairman, Nissan Americas. “Starting today, drivers have the freedom to choose a future that produces zero tailpipe emissions, moves away from our dependence on fossil fuels, and represents the end of trips to the gas station. This Nissan LEAF delivery is the first of thousands and signifies the dawn of a movement that brings sustainable mobility to within our grasp.”

“San Francisco is committed to make the Bay Area the top EV market in America, and the fact that San Francisco is the number one market in the nation for Nissan LEAF ownership reservations is proof we’re on our way,” said San Francisco Mayor Gavin Newsom. “We are proud that Bay Area resident is the very first owner of a LEAF, anywhere in the world. We congratulate Olivier Chalouhi and the thousands of other Bay Area residents who soon will be driving electric cars, leading the way to climate friendly transportation.”

Next Steps For Nissan

Nissan is starting a week of parties as they deliver more LEAF’s in Southern California, Arizona, Oregon, Seattle and Tennessee.

However, Hawaii and Texas are set to get cars in early 2011.

Nissan does plan to reopen reservations in early 2011, as well as, deliver the vehicles by the second half of 2011.

Not quite ready for an electric car? How about an electric bike? We’ve got models (including folding electric models) from Ezip, Currie, and e-Moto.