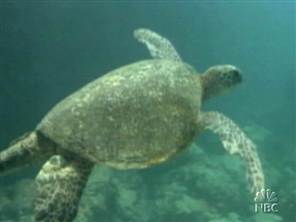 Maybe others will claim that they saw this coming, but, boy, I sure didn’t: Dubya today announced the creation of the world’s largest protected marine area:

…a group of remote Hawaiian islands that cover 84 million acres and are home to 7,000 species of birds, fish and marine mammals, at least a quarter of which are unique to Hawaii.

At a White House ceremony, the president designated the Northwestern Hawaiian Islands the United States’ 75th national monument. The islands have been described as “America’s Galapagos” and as the most intact tropical marine region under U.S. jurisdiction. …

The decision immediately sets aside 139,000 square miles of largely uninhabited islands, atolls, coral reef colonies and underwater peaks known as seamounts to be managed by federal and state agencies.

I’m floored: I simply didn’t think Dubya had it in him to take such a big step. Apparently, the decision to grant national monument status was relatively last-minute, and gives the reserve permanent protection. You’re all well aware that I’m no fan of our current POTUS, but I’ll give credit where credit’s due — this will be one positive element of his legacy. I’m really interested in your responses to this: any ideas what might have motivated this move, political or otherwise?