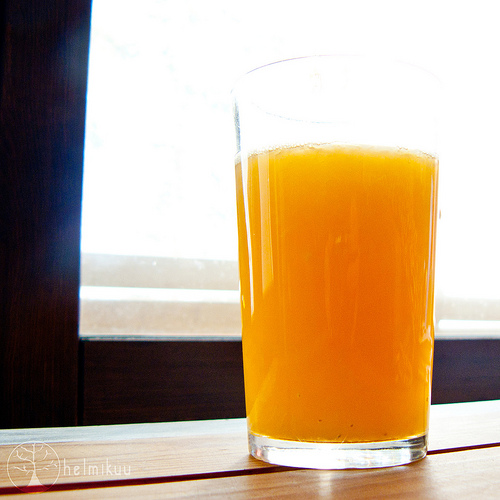 (8/11 edits in italics below based on feedback from citrus industry scientists).  A recent blog post on a site called “Food Renegade” is apparently getting quite a bit of attention on the internet.  It was critical of not-from-concentrate (NFC) orange juice because it involves the use of flavor additives and because oxygen is removed from the top of juice tanks during the process.  The post is titled, “Secret Ingredient in Your Orange Juice?”  The title is more than a bit misleading since everything it talks about is quite transparently discussed on this Tropicana Website.  It came to my attention because it  was alarming enough to make a friend of ours question whether she should be drinking this juice.  If many people are being frightened away from drinking this healthy and tasty juice, it is a sad thing.  I’d like to try to set the record straight.  (By the way, I’ve never worked for the citrus industry in any capacity, but I have done consulting projects which allowed me to learn many details about NFC juice).

The citrus industry in Florida and Texas depends mainly on sales into the juice market.  Because of urbanization pressures, rising labor costs, exotic pests, and periodic freezes – that industry is no longer competitive with Brazil for the frozen concentrate market.  Several years ago, a new process was developed for citrus juice which produces a product with a much fresher taste.  It is highly preferred by most consumers.  Instead of concentrating the juice with a great deal of energy and then freezing it,  NFC juice is “flash pasteurized” with limited heat and time so that most of the flavor elements are maintained.  The last I heard, it was not possible to routinely ship tank loads of this kind of juice from Brazil without spoilage.  Thus, the American producers have an advantage in this part of the market.  NFC juice has probably saved this part of the US farming sector for now.

What About The Flavor Additives?

As the Food Renegade article actually acknowledges, the additives in this case are derived from the peels of oranges.  They are completely natural and normal citrus flavors, and this is quite openly discussed on the Tropicana website (Again, exactly how is that a “secret?”)  The reason the flavors are needed is to maintain a more consistent tasting product throughout the year.  Because this product is only minimally processed and sold relatively quickly, it requires changing sources of fruit over time.  This is accomplished by using different varieties of trees that mature at different times, and by using the a somewhat unique feature of citrus.  For most fruit, there is a very narrow window between when it is under-ripe and over-ripe, but citrus will “store on the tree” for weeks and still have good taste quality. Together the varieties and storage allow the industry to generate juice almost all year.  However, because the varieties and the weather change, there are times when the flavor of the plain juice is not consistent.  The use of the fully natural extracts for “flavor balancing” gets around that issue.

Why Remove the Oxygen?

The Food Renegade article implied that because the oxygen was removed from the juice, it had no flavor.   The oxygen point came from another transparent discussion on the Tropicana site about how some of the juice has to be held for periods of time in cold tank storage to cover parts of the year when it is hard to get enough oranges.  The reason for protecting the juice from oxygen in these tanks is actually to protect the flavor and nutritional content.  Oxygen can lead to the break down of key flavor components and also breakdown of vitamin C. Removing the oxygen from the top of the tank minimizes this problem (usually this means just purging the head space with nitrogen gas – the gas that makes up 80% of the atmosphere).  Again, there is nothing negative about this step at all, and it is only a positive thing for flavor.

Using pasteurization and returning captured flavor components like this is far from new.  The first, stable, year-round, juice product was developed in the late 1800s by the founder of Welch’s.  He was an avid prohibitionist and wanted to develop an alternative to wine for communion in churches.  His pasteurized grape juice did not taste very good, so he captured the flavor components that were being lost during heating and added it back later.  The result was “Welch’s Grape Juice.”  There is nothing new or negative about this sort of add-back process, but I’d much rather drink the orange or grapefruit juices than the Concord grape type (I’ve had a glass of the NFC grapefruit juice every morning for years).

I hope this post will prevent at least a few people from being unnecessarily alarmed so that they stop drinking NFC juice. Sadly, most readers of the Renegade post and it’s copies will never hear the other side of this story.  Some will heed the author’s closing recommendation that the only safe option is to “opt out of the industrial food system as much as possible,” and to grow, harvest or make one’s own food.  That scenario, or the second best option she offers – various local sources – would mean a low diversity diet for people in most geographies.  What a sad, pseudo-ascetic, unhealthy lifestyle for this “wellness coach” to recommend!

The irony is that the author of that blog got all her “secret” information from a perfectly transparent and reasonable website posted by the very company that she denigrated.

You are invited to comment here and/or email me at savage.sd@gmail.com