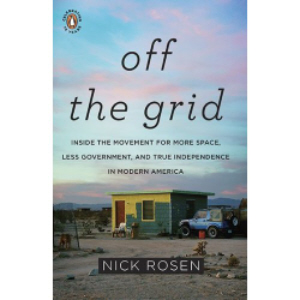 You may have noticed that we’ve published more content in recent months on off-grid living: my connection to the Dancing Rabbit Ecovillage, and introduction to a number of writers living this way, has provided great insight into the day-to-day practices of those who rely on solar panels or wind turbines for energy, rain collection and wells for water, and gardening and animal husbandry for food. It’s not an easy way to live, but it’s possible, and our contributors have provided useful practical information… plus a peek at the motivations for those who choose to forgo many of the “modern conveniences” most of us take for granted.

In his new book Off the Grid: Inside the Movement for More Space, Less Government, and True Independence in Modern America (affiliate link), documentary film maker, author, and owner of Off-Grid.net Nick Rosen digs deeper into the reasons more Americans are choosing to live of the power grid. What he finds goes well beyond the desire for a more sustainable lifestyle that we tend to promote here. While there are certainly those looking to live according to natural rhythms, Rosen also interviews and profiles pot growers, Mennonites, foreclosure victims, and billionaires… all who see the grid itself as a symbol of individual dependence on mainstream culture and values, and large, faceless institutions. Whether deliberately or not, choosing to live off-grid is as much a political as a an environmental statement for these people.

A Brit Travels through Off-the-Grid America

In many ways, Rosen’s book is a travel narrative… one that’s founded on the notion of “a stranger in a strange land.” Rosen himself is British (though he’s spent a lot of time in the United States); he’s also lived off-grid part-time himself. He presents a very personal view of the people and communities he encounters along the way… and makes no bones about the many people he finds odd (if not weird), or downright hypocritical.

I tend to agree with David Quilty’s assessment that Rosen’s tendency to judge his subjects (sometimes harshly) can be off-putting. Yes, many of these folks are eccentric, and many don’t realize the contradictions embedded in their off-grid choices. Rosen might do well to back off the “gonzo” styling just a bit to let these people speak more for themselves. But, on his behalf, he doesn’t take the easy road of just visiting eco-villages and conventional developments that rely on generating their own power… he really attempts to present the breadth of the off-grid community.

From Anarchists to Insurance Salesmen: The Faces of the Off-Grid “Community”

The real strength of Rosen’s book revolves around the people he profiles, and their stories and struggles. Yes, Michael Reynolds shows up (and rubs Rosen the wrong way), but so does an anarchist commune in Maine, a single mother in Texas, a Mennonite millionaire in Kentucky, and even an insurance company owner in the Florida Keys. Each of these people has stories to share: some of fervent belief of one kind or another (from religious belief to conspiracy theories), others of economic hardship, and still others of choices made to live according to a particular values set (some environmental, but not always).

All of these stories come together to provide a sort of reverse-mirror image of contemporary America. If most of us suffer from affluenza, all of these people have, in some way or another, found something different… something often more satisfying and liberating. Many struggle to maintain their way of life, while others struggle with off-gridding itself. The insurance salesman mentioned above, for instance, would really like his little community on No-Name Key to go on-grid.

Ultimately, Rosen presents the grid itself as a representation of an illusory quality of mainstream American life: we have no choice but to live the way most of us do, regardless of how it impacts the natural world… or our own happiness. Throughout the book, Rosen shows us the people who have made other choices… and how those choices have changed the quality of their lives, often for the better. Rosen doesn’t attempt to argue that off-gridding is for everyone, nor does he harp on the point that much of our grid-connected lifestyles are unsustainable… but he does show vividly that many who rebel against mainstream forms of connection aren’t half-crazed hermits or cultists… but individuals who have found something meaningful by choosing a different path.