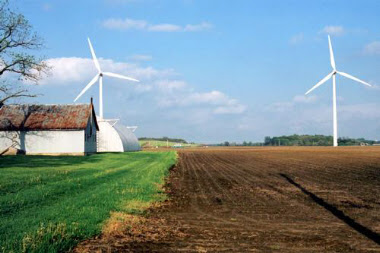 It’s looking like it: according to the Springfield News-Sun, “Backers of renewable energies are ratcheting efforts to get passed this fall legislation mandating that 20 percent of Ohio’s total energy come from wind energy production.” Supporters of a statewide renewable energy standard believe the time is right, as Gov. Ted Strickland will also be introducing his comprehensive energy plan for Ohio by the end of the year, and many expect him the plan to call for a reduced dependence on coal for electricity production.

This is good news in and of itself, but one of the things I found most interesting about the proposal for Ohio is the singling out of wind power as the technology for meeting the standard. I did a little digging around on existing RESs, and it looks like they all incorporate a variety of renewable technologies into the standard. If this is correct (and I’m not absolutely sure it is), I’m not sure this is the best approach to crafting a statewide RES.

Now, I’m not bashing on wind power; far from it. Environment Ohio, a statewide group working with Ohio Rep. Jim McGregor, chairman of the alternative energy committee, to craft RES legislation, has just released a report on the potential benefits increased use of wind could bring to the state. In addition to the environmental benefits (87% of Ohio electricity is currently generated from coal), EO claims that “a 20% commitment to wind energy by 2020 would result in a:

Nothing wrong with any of that, and judging from the wind speed estimates map published on the organization’s site, wind power could work in much of the state, particularly offshore in Lake Erie. But the American Wind Energy Association doesn’t even have Ohio listed in its top 20 states for wind potential (although, admittedly, this is an old listing).

But why mandate wind in any case? Why not mandate renewable technologies, and allow utilities to experiment and find the best solutions? One need only look at the renewable energy potential in the state to see that wind would certainly need to be player, but I’d guess that biomass, methane, geothermal and even solar could also play a part in creating cleaner energy in Ohio. Mandate the standard, mandate actual renewable technologies, and then get out of the way.

I have to wonder if this is a case of only thinking about electricity and energy generation only in terms of large-scale power plants. But smaller, distributed solutions ought to play a role here, too. Whether it’s farmers using methane digesters, or homeowners using geothermal heat pumps, these all contribute to a larger percentage of renewable energy use. These kinds of technologies would also have their economic benefits, no doubt — couldn’t utilities themselves get involved in the promotion and distribution of such technologies, and perhaps even create additional revenue streams and renewable energy sources?

Not bashing on Ohio, and not even completely sure that the “wind-only” standard is really what the state is considering. But, if it is, I think it’s time to take a step back and consider the ramifications of focusing in on a single technology. Energy diversity seems key to making such standards successful.