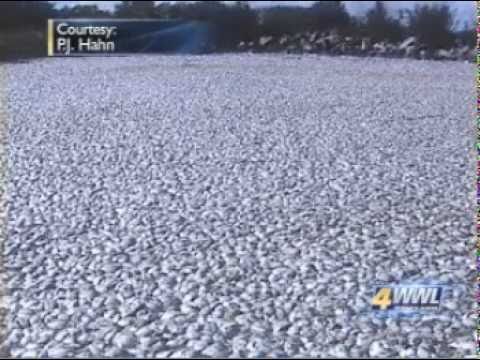 The oil spill‘s over, right? After all, BP got the cap in place last month, and, according to reports, no more oil’s leaking into the Gulf. So the drop off in media coverage just reflects realities on the ground… right?

Could be. But, as many noted throughout this crisis, the end of the oil flowing into the Gulf wouldn’t mark the end of the story. In Southeastern Louisiana, local officials and media are wondering if recent large fish and wildlife kills are related to the spill, particularly the use of almost 2 million gallons of dispersant Corexit.

Last Friday, officials in Plaquemines Parish came across a massive kill in Bayou Chaland, west of the Mississippi River. According to parish president Billy Nungesser, the kill isn’t only remarkable for its size (the bayou looks a bit like a gravel road in photos), but also the diversity of species killed: “It’s not just one group of fish– it’s redfish and trout and flounder. All species have been identified in this fish kill.” An earlier version of this report from WWLTV in New Orleans (shown below) also mentioned dead crabs, sting rays, and eels, and the most recent version notes that this kill came shortly after the discovery of a starfish kill in “nearby Barataria Bay,” and the discovery of a dead whale on Monday.

The Louisiana Department of Wildlife and Fisheries has cited “low levels of dissolved oxygen” as the cause of the Bayou Chaland kill; NOAA and the Audubon Society are still discussing who will handle the autopsy of the dead whale. Nungesser, on the other hand, doesn’t think there’s nearly enough testing going on of the spill’s impact on many elements of Gulf ecosystems.

Effects of the oil spill? A natural occurrence? Who knows?

I don’t have the scientific background or the access to challenge the Department of Wildlife and Fisheries’ findings on the kill… but given the inflow of oil, plus the massive amounts of dispersant used during the leak itself, I do have to wonder why more people aren’t asking questions… and why this story’s getting so little attention outside of the areas directly affected. I only came across it because musician and activist Drew Landry posted the original version of WWLTV’s piece on Facebook… meanwhile, those of us not on the Gulf coast are hearing either nothing, or “All’s well… start eating oysters again…”

Are the subsequent chapters of this story getting downplayed, or just plain ignored? I’d love to hear more from those of you in affected areas, particularly if you’re seeing evidence that the mainstream narrative — it’s all over — isn’t exactly accurate. Please share your stories…

Trying to reduce your own fossil fuels footprint? We’ve got current listings of products that will help… from bicycles by Fuji and Raleigh, to solar power kits, to energy-saving LED lighting options.