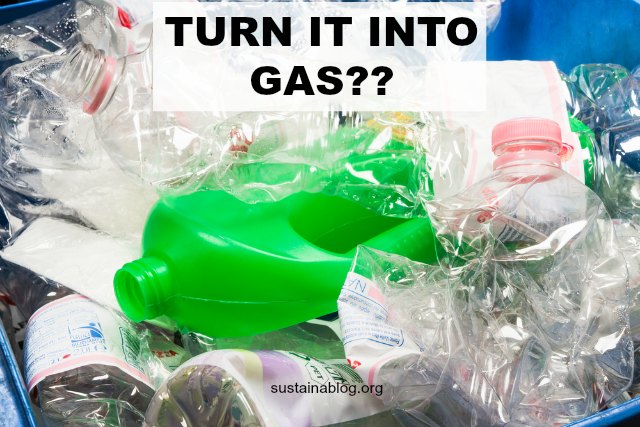 At the end of August, I took a look at plastic to fuel processes as an option for waste that couldn’t be recycled in a more traditional manner. I focused on the feed stock and end product in that post; I didn’t really think about the transportation needs this concept creates. It’s not like you can find a plastic to oil processor just anywhere, right?

If Michigan-based EcoFuel Technologies has its way, the answer to that question would be “No – those are everywhere!” Like Dow’s partner Agilyx, EcoFuel is in the plastic to fuel business; unlike the other company, EcoFuel is focused on building processing machines that can operate on-site… even on the back of a truck. That eliminates the transportation needs – and its carbon footprint – from this method of recycling plastic.

One other way that EcoFuel envisions its process differently: it can convert recyclable plastic in diesel fuel, gasoline, or industrial lubricants. In addition to polystyrene (#6 plastic), EcoFuel’s PTF100 prototype can also handle #2, #4, and #5. But shouldn’t those be recycled?

Can Plastic To Fuel Be Greener Than Traditional Recycling?

That’s where the debate comes up. A company like Agilyx argues that the three Rs are all preferable to plastic to fuel conversion: that process exist for waste that can’t be recycled (technically or economically). EcoFuel supporter Jim Holm – who also founded Clean Oceans International in Santa Cruz, California – thinks on-site conversion of plastics to diesel or gas makes more sense. He wants to bring a PTF100 to Santa Cruz to show to city officials, believing that the economics of the process work well as a solution to keeping plastic waste out of the ocean. He tells the Santa Cruz Sentinel, “The city would be directly substituting the fuel for something they would have to pay a premium price for… If the city produced 100 gallons a day, it would be 100 gallons of diesel they don’t need to buy. You’ve raised the value of that to retail.”

Yes… and it does keep future plastic waste out of the ocean. Furthermore, it strikes me that this process likely still meets some of the lifecycle benefits Agilyx raises about its own process: it’s hard to believe that the EcoFuel process is dirtier than tar sands oil, for instance.

So, is this preferable to traditional recycling? Maybe. Does it inadvertently create a demand for more plastic, or at least give manufacturers a cover? I guess the economics will determine that, but the idea of making plastic to turn it back into fuel seems wasteful (if we get to that point).

Yes, I’m fascinated by this concept; I’m guessing there’s no simple answer to the questions it raises. If you’ve got more insight, share it…