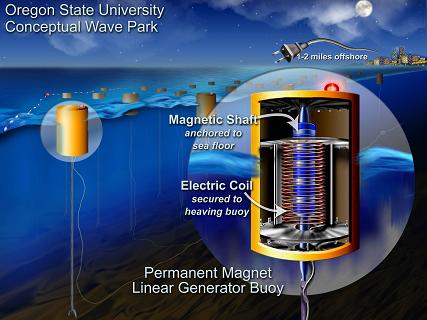 From the Oregon State Daily Barometer via energy.buzz comes news of research that the Motor Systems Research Facility, housed in OSU’s College of Engineering, is conducting on wave energy generation. John at energy.buzz notes that wave power is a latecomer to the renewable energy spectrum, but that the research occurring at OSU may make this form of energy generation competitive with other, better known renewables such as wind and solar:

Researchers are currently working with five different wave energy extraction prototypes, all of which were designed and built in the campus facility.

The final prototype will likely be a hybrid of two of the current five - the permanent magnet linear generator and the contactless force transmission system.

“The devices ‘directly’ convert the linear motion of the wave into electrical energy without any hydraulic or pneumatic stages,” von Jouanne said.

This summer the world will see its first commercial wave park in Portugal, which will use a hydraulic system to extract energy, she said. The earliest Oregon may see its wave park is two years from now.

However, von Jouanne is confident with OSU’s designs because it uses the “direct drive” technology.

“Hydraulics and pneumatics are a lot less efficient,” von Jouanne said. “The more intermediate stages you have the less reliable your system becomes.”

The facility is working with the Oregon Department of Energy “to enable Oregon to have the nation’s first commercial wave park (at Reedsport),” von Jouanne said. The eventual goal is to have a national wave research center headquartered at OSU.

While somebody will have to explain the subtleties of the engineering here, even a layperson can understand that more efficient technology for harnessing wave power means it’s more likely to become a viable part of our energy mix. I’m guessing trying to install such systems off of certain coasts would produce the same kind of debate we’ve seen over off-shore wind in Massachusetts, but I’d imagine there’s plenty of coastline around the world that’s not developed where we could install such generators. I’m intrigued by the whole concept, and interested to hear your responses. Is wave power the next big thing, or are we still to early in the planning stages to tell?