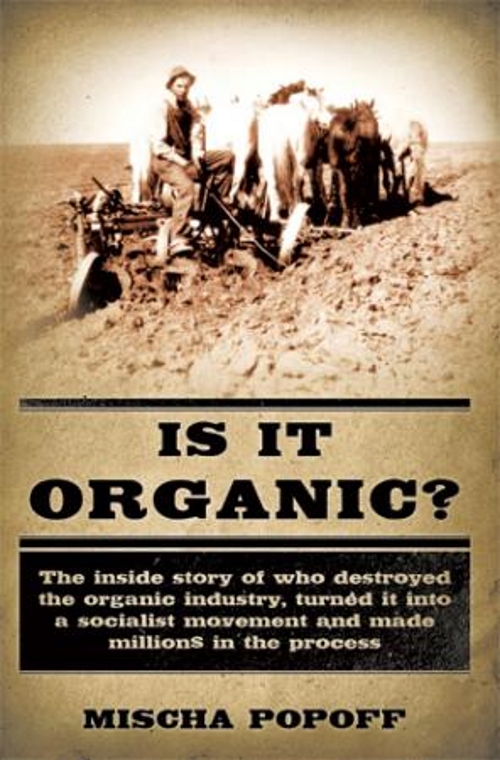 Mischa Popoff is a hard core Organic farming advocate.  He grew up on an Organic farm in Saskatchewan and went on to become a licensed, independent Organic inspector.  He still believes in the ideals of the Organic movement that he traces back to the early 18th century at the dawn of the faith-driven founding of modern, Western science.  But Mischa is disillusioned about what “Organic” has become since the finalization of the National Organic Program in the US in 2002 and comparable standards around the world.   Mischa actually traces this back to the early 20th century when Rudolf Steiner became the key driver of the Organic movement and shifted it to anti-science, Vitalism, and homeopathy as in “Biodynamics.”

In October of 2010, Popoff published a book titled Is It Organic? with the sub-title, “The inside story of who destroyed the organic industry, turned it into a socialist movement and made millions in the process.”  The core of the book is the story of Popoff’s experience as an Organic inspector.  He describes how, on the annual and pre-scheduled, on-farm visits, he would often find troubling signs of potential fraud (the use of non-allowed pesticides and fertilizers, sanitation issues…).  Popoff recommended to the various certifying agencies for which he worked that they take samples and test them in the lab.  His suggestions were never taken seriously, and at most the farmers were asked for additional paperwork.

A Fundamental Weakness of the Organic Certification Process

The incidences that Popoff describes in detail are certainly suspect, but what is more disturbing is his description of the way that Organic crops are actually certified for sale at premium prices.  Even though the system theoretically allows testing, in fact that almost never happens and everything depends on paper work.  As Popoff puts it, it is like asking Olympic athletes to sign a document saying they used no performance-enhancing drugs but never testing them.  It actually gets worse.  The certifying agency gets a fee for the farm visit, but they make much of their revenue as a percentage of the sale of the approved crop.  In any other business this is considered an “active conflict of interest.”  Do you think these certifiers would be inclined to spend money on tests that could potentially reduce their revenue?  I don’t think so!

As you might expect, after he went public with his concerns, Popoff was “black listed” among certifying agencies and driven out of the Organic industry.

To be balanced, there are a few things about this book that are less than ideal.  First of all, at 538 pages before the index, it is a daunting read (though one could use the extensive index to read selectively).  Second, Popoff spends a great deal of time arguing that the current Organic industry downstream from the farmer (brokers, distributors, retailers, regulators) is part of a sort of conspiracy from the Left.  It seems to me that these “socialists” are actually pretty good capitalists so I’m not sure I buy all of that argument.  Popoff maintains that all socialist movements tend to be well financed and he may be right.  Third, the tone of the book is often sarcastic and/or snarky in a way that will put-off many readers who actually need to hear what Popoff is saying.

On the positive side, Mischa’s story is honest and deeply personal.  He is careful to point out that there are many completely honest and skilled Organic farmers.  He should qualify as a card-carrying historian for his tracking of the origins of this movement and the history of science in general.  He is also a realist who recognizes that Organic (the pure type he favors) will never be a large part of the food supply.  He also says that: “people in the third world need organic farming like they need caviar and 15-year-old Scotch.”

Why This Is A Big Deal

Probably the most disturbing message of this book is that if there is some degree of fraud in Organic in “rule following” societies like Canada or the US, what about the un-tested, paper-work-only “Organic” products coming from outside North America and particularly from China?  Popoff is not the only one raising this issue (PRI, Treehugger).  Since US Organic acreage only represents 0.5% of cropland and is generally only 60% as productive, a large proportion of what is sold as Organic comes from outside of the US – particularly any grain-based, frozen, or fruit sweetener containing products.  Mischa Popoff’s question, Is it Organic takes on a whole new meaning in that context.