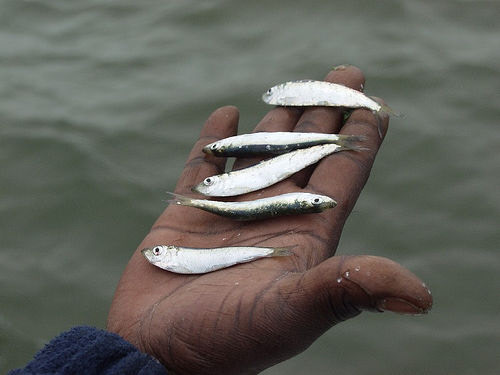 The fish near the bottom of the aquatic food chain are often overlooked, but they are vital to healthy oceans and estuaries. Collectively known as forage fish, these species—including sardines, anchovies, herrings, and shrimp-like crustaceans called krill—feed on plankton and become food themselves for larger fish, seabirds, and marine mammals. Historically, people have eaten many of these fish, too, of course. But as demand for animal protein has soared over the last half-century, more and more forage fish have been caught to feed livestock and farmed fish instead of being eaten by people directly. A growing body of scientific evidence suggests that current fishing levels are dangerously high—both for the forage fish themselves and for the predators and industries that depend on them.

Found from the tropics to the poles, forage fish typically travel in dense schools of thousands or even millions of fish. While this is effective for guarding against ocean predators, it makes them easy prey for modern fishing fleets equipped with purse seine nets that can cinch up an entire school at once. What’s more, forage fish stocks are highly sensitive to environmental change and prone to population crashes, so fishing levels considered safe in good years can be disastrous in bad ones.

Many of the world’s largest fisheries focus on forage species, including Peruvian anchovy, Atlantic herring, and chub mackerel. Together, forage fish typically account for more than 30 percent of the 80 million tons of fish caught annually in the world’s oceans and estuaries. Roughly 9 of every 10 tons of forage fish hauled in are destined for the “reduction” factory, where they are cooked and pressed to extract the oil; what remains is then dried and milled into fishmeal, a high-protein brownish powder. About 6 million tons of fishmeal and 1 million tons of fish oil are produced each year. Nearly all of the fishmeal is fed to farmed fish, pigs, and poultry. The oil, high in omega-3 fatty acids that are prized for their health benefits, is a popular feed additive and is also used as a nutritional supplement for humans.

The Value of Forage Fish

Notwithstanding their large contribution to the world fish catch, recent research suggests that forage fish are worth at least twice as much in the ocean as they are on the boat. In 2012 the Lenfest Forage Fish Task Force, an international group of 13 distinguished marine and fisheries scientists, released the results of a three-year study in a report entitled Little Fish, Big Impact. The authors calculated that forage fish generate nearly $17 billion per year in reported catch—$5.6 billion for the small fish themselves and $11.3 billion in landings of the fish that eat them. This does not include the value of ecotourism for watching whales, which eat forage fish; the value of recreational sport fishing where forage fish are used as bait; or the important role of forage fish in keeping plankton under control.

Forage fish have a long history of being targeted for meal and oil. For example, Atlantic menhaden—herring and sardine relatives that migrate along the U.S. Atlantic coast—were first sent to processing factories in New England and the mid-Atlantic region in the mid-1800s to become fertilizer and a cheap substitute for whale oil, which was used in everything from leather tanning to cosmetics. Menhaden meal was later used in animal feed, beginning in the early 1900s. (Around that time, North Europeans started fishing Atlantic herring for the same purpose.) Still used mainly in feed but also in health supplements, Atlantic menhaden are one of the largest U.S. fisheries by weight today.

As more pork and poultry producers in the United States and Europe began using inexpensive fishmeal in feed rations, landings of forage fish grew. When the large-scale Peruvian anchovy fishery was launched in the 1950s and Peru and Chile began to aggressively exploit the productive waters along the western coast of South America, fishmeal use in feed began to spread worldwide. For decades now, the Peruvian anchovy has been not just the world’s largest source of fishmeal, but the world’s largest fishery overall, in some years topping 10 million tons. Peru alone has some 1,200 vessels supplying anchovy to 140 reduction factories, which produce meal and oil worth about $2 billion per year in exports.

While the Peruvian anchovy fishery is indeed lucrative, it is also, like many other forage fisheries, highly dependent on favorable environmental conditions. Especially during El Niño events, warm Pacific Ocean waters—sometimes with overfishing as an accomplice—have over the decades led to numerous anchovy population crashes and devastated harvests. In October 2012, Peru cut the allowed anchovy catch to its lowest level in 25 years after the fish’s population plummeted yet again, likely due to warmer ocean temperatures. With the anchovy supply thus restricted, the world price of fishmeal jumped to a record high by December. (See data.)

A half-century earlier, the young but already massive Peruvian anchovy fishery illustrated the ecological repercussions of heavy forage fishing. Unfavorably warm waters and an anchovy catch averaging 8 million tons per year depleted the food base for cormorants, gannets, and pelicans in the mid-1960s. Severe population declines among these birds ensued. Cormorants, almost entirely reliant on anchovies for food, saw an 89 percent drop from their historical average. Seabird populations in this ecosystem still have not recovered.

Worldwide, three quarters of the 72 marine ecosystems studied by the Lenfest Task Force contain predators dependent on forage fish for at least half their diet. Some predators, including the blue whale, Humboldt penguin, and yellowfin tuna, rely on forage fish for at least 75 percent of their diets. For these animals, plummeting prey populations can mean both impaired breeding and starvation.

The vast majority of the world’s forage fish stocks are either considered fully exploited, with no room for safely increasing the catch, or they are already overfished and in need of rebuilding. Given the climate sensitivity of forage fish and the key ecological role they play, the Lenfest authors recommend that, in general, catches should be half their current levels.

Next Page: Some Positive Signs in Reducing Demand for Forage Fish