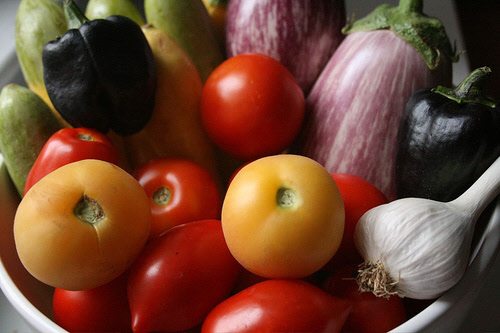 In celebration of its relaunch, Greenhome.com, the original online ecostore, is sharing stories of some of its customers, and their motivations for buying green.

Her name is Cynthia Neftin, and she is the owner of Oxnard, California-based Café Nefola, whose motto is “healthy, local, fresh and natural.” An additional tag line – “from fat to fit, this is it” – leaves returning customers and new visitors in no doubt as to the restaurant’s orientation.

If you need to mend your ways – and who in Oxnard, the franchise capital of California, doesn’t? – you will appreciate Café Nefola’s menu, which focuses on comestibles that are so good for you, you might literally start to vibrate when you close the door behind you.

When did Cynthia get her green on? After several false starts, as a manicurist and then a caterer, she moved to Oxnard, which was largely rural, and realized she wanted to own a restaurant. Or something.

The first restaurant was an ice cream franchise. The relationship didn’t last, but Cynthia was still stuck for the lease, so she looked around – at a rural village that was still in the formative stages – and made a vertical leap, right into a rural mindset that was already acquainted with local, fresh, and natural.

“I had everything right here, at the tips of my fingers, and it naturally got me to where I am now.”

Now is a completely 21st century realization that things have to change, whether it’s eating or manufacturing products. Cynthia quickly found her go-to green source with Greenhome.com, which has an entire subsection devoted to green food service supplies like compostable smoothie cups and bagasse takeout containers. There is no other way to make things work. And it works for Cynthia on a very personal level as well.

Part of her green is local sourcing. This means arugula and spinach greens, but not water chestnuts or bean sprouts. Many of her customers don’t mind the fact that some things which aren’t locally grown don’t appear on the menu. Others do. To please both factions, Cynthia occasionally brings in some non-local items like Valencia oranges from Florida to rival the region’s navel oranges. But she makes such concessions knowing that, in time, her desired clientele will accept the idea of fresh and local, which is how I started and how I want to be.”

The biggest problem in running a fresh, local, “green” restaurant – double focus on the green (as a meme and as the color of healthy vegetables) – is getting what she needs when she needs it.

“But even in that area, I’ve noticed that store owners are becoming more receptive to the green theme and more responsive in stocking environmentally-friendly products. For example, one local store is beginning to carry compostable products. Not recyclable, but compostable!”

“About 25 years! Recyclable means it can be repurposed, but uses energy to become so. If not recycled, it persists in a landfill for a quarter century. Compostable, on the other hand has a waste stream lifecycle of about 30 to 90 days.

“In other words, people think recyclable is going to save us. It is not. A good example would be plastic bags in a supermarket, which are no longer supplied (in California, at least). I think people are going to notice that, learn more about it, and ultimately realize that we (humans) don’t have a choice.”

Cynthia must be doing something right! Even her growing group of vegan advocates hasn’t outed her for her food choices, food service items, or her food ideology. And professional that she is, she never ‘settles’ for second-best.

“And they’re a tough group. They really care about the green food philosophy, and about their bodies.”

The future for Café Nefola is a move in about two weeks, to what Cynthia calls a “better location”. Is there one? After all, the restaurant is relocating from a front-row view of the Channel Islands Harbor.

“It’s closer in, and I’m hoping to get a couple of bicycles out front to encourage bike commuting instead of driving. The café is also going to get into the delivery business.

On a final note, Cynthia shared with me one of her ‘greener’ ventures. The company is LifeSource. With one water filtration unit at her restaurant and another at her home, she is probably as much an expert as company salespersons, assuming there are any.

According to Cynthia, not only is it the best-tasting water she has ever had, but when used to wash produce it makes fruits and vegetables last longer without any chemicals.

“I wash my lettuce, and it lasts a week to a week and a half.”

Try that with your city water, or even your shallow urban well water. LifeSource water systems are also easily movable, in case you decide to head for a better climate. Better than Southern California. You’ve got to be joking, dude!