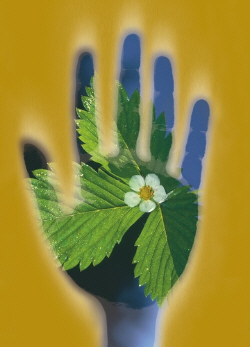 Editor’s note: No, not paper or plastic… we’ve been there. David Shaw takes a look at the environmental impact of hand-washing, and finds there’s a better way… even better than “Press button. Rub hands under warm air. Wipe hands on pants.” David originally published this post to Professor Simran Sethi’s Media and the Environment course blog on Wednesday, March 5, 2008.

I drink at least a liter of water a day, which means I end up using the restroom at least five times a day. In the bathroom at work, we have the fairly standard stack of single sheet paper towels that you pull from the holder one at a time (although sometimes a clump comes out, if they’re packed too tightly). It takes two paper towels to dry my hands thoroughly.

First, I decided to cut down to just one paper towel. Yeah, my hands were still a little damp when I left the restroom, but they air dried within a minute or two. Still, with one paper towel per hand washing, I was using at least 1,200 paper towels a year. Not good enough.

This has been bugging me for a while. Finally, one day I had an epiphany. If I were to use one of those quick drying microfiber towels that hikers and campers use, I could just keep that in my pocket and use it to dry my hands anywhere I go. AND they are made with some sort of anti-microbial/germ fighting thing that helps prevent them from getting getting germy and stinky.

I was at a sporting goods store with my wife’s parents over the weekend and I found a small microfiber hand towel that even comes in its own cute little nylon pouch. I bought one as a gift for my wife’s birthday in May and I asked her to get me one for mine, which is later this month.

I will reduce my carbon footprint even more with this little towel. And I’ll save some trees, too!

Turns out there’s a company based on this concept: People Towels. And, of course, we’ve got numerous organic hand towels listed in our product comparison engine.