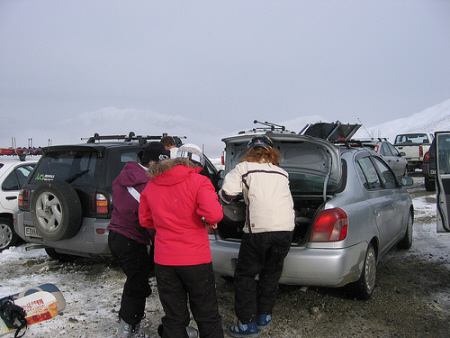 Across the country, car sharing has taken off. Programs like Zipcar, PhillyCarShare, Car2Go in Austin, Texas, City CarShare in San Francisco, as well as big name rental companies like Hertz and Enterprise, are helping people get around without owning a car. For many people who don’t want the hassle of car ownership—insurance, trips to the DMV, high gas prices, and parking—this is an easy option for the times they need a car to get to the beach or reach a far flung place not accessible via transit or bike.

By sharing rather than owning, car share participants cut their average vehicle use, which means a cut in gasoline consumption, greenhouse gas emissions and smog-forming pollution. A UC Berkeley study done for San Francisco’s City CarShare, found that 30% of City CarShare households sold one or more of their cars after joining the program and automobile travel among members dropped 47%. The study concluded that City CarShare members save 720 gallons of gas or 20,000 pounds of carbon dioxide emissions on a daily basis.

A new state bill, AB 1871, was passed in the California Assembly on June 3rd with bipartisan support. Introduced by California Assemblyman Dave Jones (D-Sacramento), AB 1871 would take car sharing one step further by removing some important barriers to car sharing. This has great potential for a range of arrangements that would ultimately lead to a reduction of vehicles in a given neighborhood.

Suppose, for instance, you’d  like to buy an SUV because you anticipate going skiing, or maybe you might want to buy a light-duty truck because every year you need it to haul your grandma’s jams to the farmer’s market. If you knew you could easily share a neighbor’s SUV or truck located just a block or two from your home, you might not feel compelled to buy the gas guzzler, and instead, opt for a smaller car for daily use.

In exchange for sharing his or her vehicle, under AB 1871, your neighbor with the truck would be reimbursed for the costs of operation by the car sharing company. This would help defray some of the truck’s fixed expenses, such as parking costs, though AB 1871 caps the reimbursement so the vehicle doesn’t become a commercial enterprise for the owner.

While this makes sense on paper, what happens when someone scratches the handle or gets into a more serious accident while driving your car? The basic gist of AB 1871 is this insurance piece, which is a tricky one. Currently, if an individual opts to put his or her own car into a car sharing program, a typical insurance company would consider the vehicle to be a commercial vehicle and would invalidate the individual’s personal insurance.

AB 1871 addresses this by clearly demarcating  liability. When a person’s personal vehicle is in the car sharing program, the program assumes all liabilities, and when it is in the owner’s possession, it goes back to being a personal vehicle covered by the owner’s own insurance.  This clear demarcation is helped through technology that records when the car is and isn’t under the car sharing program’s control.

These insurance fixes widen the scope of existing car sharing companies without putting more cars on the road. Carsharing programs are tough to get started in lower density areas as demand just isn’t high enough, and the capital costs of purchasing new fleets often isn’t worth it. With personal car sharing, these programs can begin to move out of urban areas, expanding transportation choices for more people.

The personal vehicle sharing company behind this legislation, Spride, is a Silicon Valley company started up by venture capitalist Sunil Paul. If AB 1871 is enacted, Spride aims to link up with San Francisco’s CityCarshare to run a pilot program, using the web and social networking to pair people with cars, with pricing based on make and model.

Car share aficionados in other states—especially Massachusetts where RelayRides is working– are watching what happens with the California legislation. Personal car sharing presents an innovative transportation choice that is financially smart, reduces greenhouse gases, and improves air quality. People want a variety of mobility options, and personal car sharing is a really creative way to solve these needs.

Need other items for that outdoor trip that also reflect your green values? Check out our current listings of camping gear, canteens, solar cookers, and other outdoor equipment in the Green Choices product comparison engine.