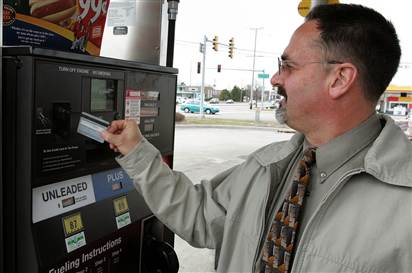 From the UK’s Guardian via Finnish blog Endogenous Preferences comes news of a concept for Carbon Trading 2.0 — the personal version:

In a few years from now you will have another plastic card in your wallet – your carbon card. You will start the year with 1,000 points on it and each time you fill up your car, you put the card in a slot on the pump and it will deduct a few points.

Each time you buy an airline ticket, it will cost you a minimum of 100 points. If you fly regularly, you may have to buy more points through the carbon market – but since it is all in the cause of reducing greenhouse gas emissions you do not mind so much.

An environmentalist’s pipe dream? Not at all, but a scheme put before parliament 18 months ago in a private member’s bill sponsored by Colin Challen, the Labour MP for Morley & Rothwell.

Mr Challen hopes that a national scheme will be in place by 2009, and along with 44 other MPs he is working to reduce his own carbon emissions by 25% by 2010 as an example of how individuals need to start doing their bit on climate change.

“The idea is picking up speed but it is a radical one and needs to be widely debated,’ he said.

It certainly is radical, but I really like the idea of individuals taking responsbility for their own carbon emissions. Does that mean this is a viable idea? Probably not — can you imagine a U.S. politician even considering introducing such an idea…? Got to give it to MP Challen, though, for thinking big… The article notes that Britain’s Royal Society for the Arts also has ideas about personal carbon allowances.

That’s it for tonight — I’m whipped… See you tomorrow.