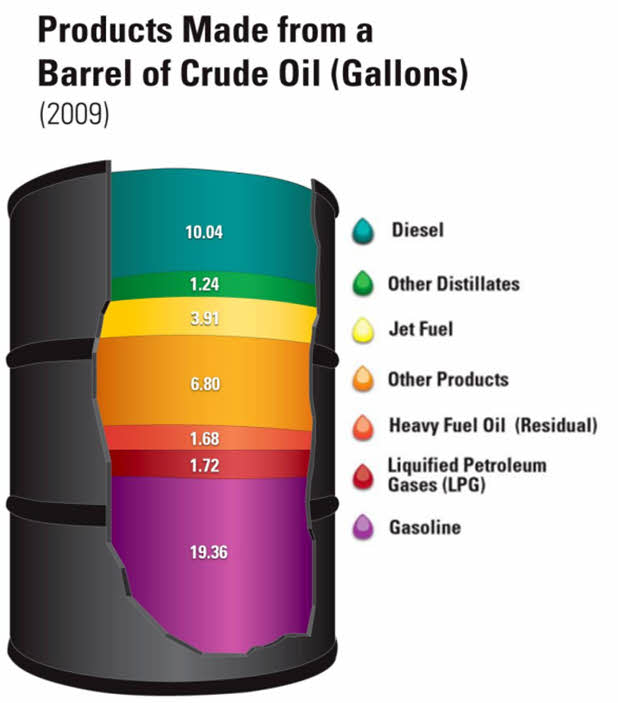 If oil is so ingrained in the modern world we all know — ubiquitous in the manufacturing and transporting of countless consumer products — does that mean we are hopelessly dependent upon it?

The question came to mind after receiving a comment from Morris (no last name given) on a previous post of mine here at sustainablog.org, World Naked Bike Ride: Is Anything Gained by Protesting Oil Dependency in the Buff?

Not to put words in Morris’s mouth, but he seems to suggest that oil cannot be escaped. Is he right? Even if he is, does that mean we should abandon efforts to break our addiction to crude?

Sure, he makes a valid point in reminding us that oil has been used to make the very bicycles naked riders use in their World Naked Bike Ride protests around the world.

“If it weren’t for oil they wouldn’t be riding those bikes, they’d be walking, barefoot, naked with no glasses! Not to mention the streets would be dirt, not paved. There would be no electric lights, no drinks at the end of the ride, no music. Should I go on?”

Yes, let’s go just a little further. I did a quick Internet search for more oil-based products. The Arctic National Wildlife Refuge publishes a list of oil uses on its Web site.

Here is a brief excerpt:

Okay. Sure, that’s a tad discomforting to think the oil we ship over from the Middle East is ending up in my food, but does that solve the question about giving in to the dependency? We should just quit worrying about our addiction?

Alcoholics are not told, “Go ahead, drink yourself into self-destruction. After all, there’s tiny amounts of alcohol in hygiene products and seemingly countless food items. You’ll never escape it, so why try?”

Of course not. Alcoholics are coaxed off of the habit and, hopefully, back into productive, healthy lifestyles.

So let’s keep our eyes on the ball, huh? This topic, as most things in life, lands somewhere in the gray area between the extremes of opposing perspectives. No one is riding bikes sans clothing because of a notion that they are calling an end to all uses of oil.

It’s not either you are for oil or against it, an all or nothing, polarizing situation of ultimate right or wrong.

The call is for some reasonable re-assessments of where we stand with 21st Century environmental conditions, and the 21st Century technology we have to cope with the related problems. These issues didn’t exist on this scale a hundred years ago when the car was invented. Cars have evolved, so why shouldn’t fuel evolve, too?

According to the U.S. Department of Energy, nearly 35 gallons of every 42-gallon barrel of crude oil (shown in the graphic above) is used for one type of transportation fuel or another. The rest, in various other forms, is what goes into the consumer products we use on a daily basis.

A call for alternative energies that reduce our addiction to foreign oil, and a call to lessen our willingness to accept unnecessarily low fuel economy from automakers and the mileage standards set by the government does not mean we all have to give up modern conveniences, overall hygiene or sleeping with sheets, mattresses and pillows.

Speaking out for improvements in energy policies, even if riding in the buff to do it, is not a lost cause. The only lost cause in the debate about energy is to give up and assume our oil habit is irreversible.