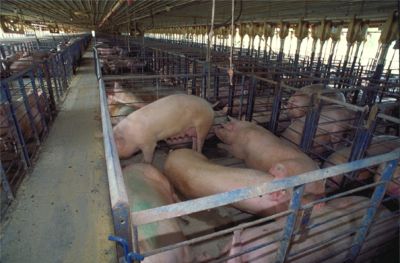 Great post and discussion over at Gristmill in response to a New York Times op-ed (registration required) on the use of methane digesters to convert animal poop to power on farms. Lawyer and cattle rancher Nicolette Hahn Niman writes in the NYT:

Government officials tout such projects as energy generation that benefits both nature and agriculture, and are pouring public funds into them. Few seem to question whether the projects make economic or environmental sense. And there are plenty of questions that need to be addressed. For starters, manure simply does not contain enough energy to produce cost-effective power. Studies show that manure power projects are probably not viable without large public subsidies and are likely to remain so. An analysis by researchers at the University of Minnesota’s Applied Economics Department found that methane digesters are dependent on big subsidies to break even. Electrical rates would have to double to pay the full cost of digesters, says Jeff Lorimor, an Iowa State University agricultural engineering professor. Electricity from manure-burning incinerators is also much more expensive than other power, requiring federal and state subsidies to make it competitive with other sources, according to the Institute for Local Self-Reliance.

Part of the problem is that the digesters, incinerators and biodiesel plants are expensive to build and run. Cost and technical complexity make these manure power projects more economical when done on an industrial scale, with operations that produce vast quantities of manure. It’s telling that one of the first major manure biodiesel plants in the United States will use the millions of pounds of waste produced by the 500,000 pigs at a Smithfield Foods operation in Utah. (note: here’s information from the NRDC and the UFCW on Smithfield)

But even the largest projects require significant public money for construction and operation. This has also been Europe’s experience with manure power projects.

But as with many things, you can’t say that capturing methane from manure is always bad. It all depends on the size. For example, this January I helped build a biodigestor on a small farm in Costa Rica as part of a class on Renewable Energy in the Developing World organized by Solar Energy International. (For pictures see the bottom of this page.) Once it is fully operational, the manure from Don Sedro’s pigs will provide methane for cooking — replacing the cylinders of propane that cost him $60 per month — and a liquid that will fertilize his small garden. Is that the sweet smell of sustainability (or just the pigs)?

The question, it seems, is one of scale — if methane digesters ultimately support further growth of industrial-style farming, it’s hard to see them as a positive. But, if they can be used as appropriate technology that bolsters small farmers’ abilities to close the loop (ie, the Dream Farm model), that’s got to be a good thing… right? I’m quickly getting out of my league here, so chime in…