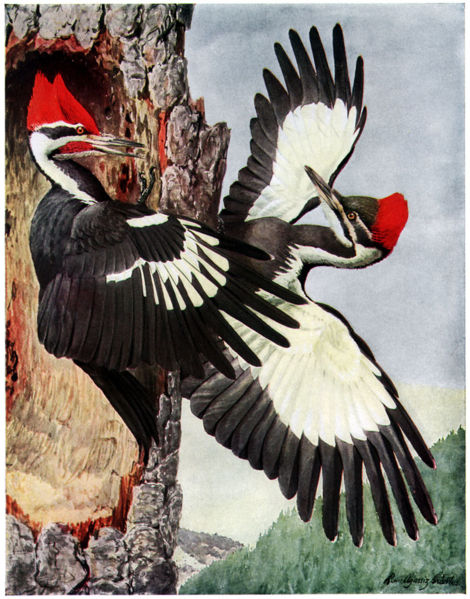 On my walk the other morning, I passed by a point in the woods where two pileated woodpeckers seemed to be in the throes of a frenzied debate. Listening to their contrapuntal cacophony, I could not help but think they had escaped from nature’s version of a psychiatric ward. And this is true for the whole lot of them. Perhaps, many eons ago, the first pileated slammed its face into a tree one too many times. (And you have to wonder what the other animals must have thought when that first winged oddity of black and white and red showed up on the scene.
“What on Earth is that thing?” one wooly mammoth asks another.
“Beats me.”
“And why does he keep head butting that tree?”
“I dunno. Must be a loon.”
“You got that right. That one sure won’t last long.”)

As I rambled on, pondering over the evolutionary conundrum that is the pileated woodpecker, I became more aware of the entire environmental aria that I had been missing while lost in my own little mental world. Ah, the tyranny of thinking….

It was really just grand (the aria, that is). Every note on the scale was being hit by some living instrument at some moment. The measures were not quite in sync, for sure, and yet the melodies came together in a strangely enthralling harmony that carried me with it as I tripped along.

And this was no one-morning-only performance. Oh no. I quickly realized that this symphony was in full swing every morning, every day…every bloody moment!

If I actually listen, I can always here something going on and something to appreciate. Birds singing, frogs croaking, squirrels chattering their encoded schemes to pillage my bird feeders, bees buzzing, crickets chirruping, cicadas whirring, water murmuring, rain splattering, the breeze blowing…. Nature has an infinite selection of tunes to play, and every one is a classic.

I knew then why I suffer to the point of heat stroke rather than turn on the air conditioner even when the dog days of summer pack their most fearsome bite: The claptrap of that rattling contraption entirely drowns out the calls of the wild. Central units are less auricularly offensive, but even they force you to close the windows. Fans are more tolerable, breezes are best.

I knew then why I am such an early bird that I make the early birds look like night owls: There is nothing more magical than listening as the world comes awake. That first birdsong before dawn even starts to stir from slumber is just unreal, breaking the spell of night and seeming to evoke the sun up from the horizon. (And it almost always, at least where I live, is the song of a cardinal–a lovely sort of tee-vo, tee-vo, twirp twirp twirp to start off, like a clearing of the throat, before the singer unleashes for the day. Sometimes, though, a frisky wren will beat the cardinal out of bed and crank up its ratchety chatter and a mix of melodies.)

And so I know that nature, in fact, is never ever silent. At any point in our busily, rationally, terribly, and beautifully human existence, nature is singing to us. Anywhere and everywhere, the countless calls of the wild are calling out to us–calling out to us to listen up and to join in. After all, we humans are animals, too, and our voices are part of the natural symphony…even if they are a bit out of tune.

Perhaps, then, we need to heed those calls of the wild. Perhaps we need to go wild like the pileated woodpeckers bellowing maniacally before they slam their faces into the trees–again and again and again. Perhaps we would do well to take inspiration from their inspired madness.