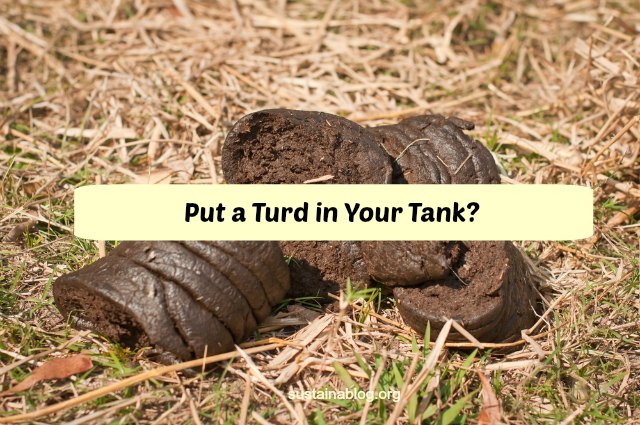 As we’ve noted before, the food vs. fuel debate may become one we don’t need to have: inedible feed stocks for ethanol are popping up all over the place. Many of those still have to prove their commercial viability, but not cow manure: a new plant in Calgren, California, is making ethanol from this waste resource. As Tulare County has grown into the top dairy producing county in the United States, there’s plenty of poop available, and the plant’s process also extracts water that can be used by local farmers for crops.

Leon Kaye published this very detailed post at sister site Cleantechnica. If you’ve got thoughts, or experience with deriving this particular form of poor power, head for the comments…

The San Joaquin Valley has become America’s breadbasket over the past few decades. Products including pistachios, almonds, citrus, stone fruit, cotton, and grapes are grown here and distributed all over the United States and are exported around the world. Tulare County, about a three-hour drive north of Los Angeles, recently surpassed nearby Fresno County to become the wealthiest agricultural county in the U.S. Home to 450,000 people, Tulare is also the top dairy producing country in the U.S. That means a lot of cows, which means a lot of manure, and in turn, all that agricultural activity has contributed to a region that has one of the worst air pollution records in the country. Furthermore, effluent from cow waste is a huge threat to what already are the San Joaquin Valley’s stressed watersheds.

On the upside, all that agricultural waste creates a solid biofuels pipeline. Forget the food-versus-fuel debate: many of the crops grown in the valley are high-value products that are lucrative, and the region’s conservative bent leads farmers and ranchers to stick to the crops, trees, and animals they know. But eliminating waste, especially cow manure, is becoming expensive and of course, problematic for the local environment.

The recent launch of the Calgren Ethanol Plant in the Tulare County town of Pixley is a step in helping California meet its clean energy goals while addressing the San Joaquin Valley’s terrible air pollution. Built with the help of a $4.6 million grant from the California Energy Commission, the plant, according to the coalition of companies that built the facility, will churn cow manure into bio-ethanol which can then be blended with conventional gasoline.

The core of Calgren’s plant is an anaerobic digester built by DVO, which is based in Wisconsin. Regensis, a Washington state building contractor, was in charge of the plant’s construction. Calgren Renewable Fuels operates the plant, the output of which will be enough to fuel 145,000 cars annually. At a recent ceremony that hailed the plant’s opening, company and California officials touted the plant for what they say is a genuine closed-loop system. In addition to generating ethanol, biogas will also be produced in order to power the facility, nixing any need to be connected to the local grid.

The process starts with a nearby dairy, Four J Farms. Cow manure from the 1,800 milk-producing cattle will flow down a pipeline to the Calgren plant. The manure is then deposited into the DVO-designed digester that is 16 feet deep and insulated with concrete to prevent any leakage from entering local groundwater. Bacteria that naturally occur within cows’ digestive tracts are added to the manure, when is then stored and churned there while it is kept at a consistent warmth of 101.5°F (38°C). The three-plus weeks the manure is kept at that temperature is to guarantee any pathogens would be killed off, including e coli. The result is a system that works almost exactly like a cow’s digestive system.

Later in the process, while clean fuel is culled from the manure, moisture is also extracted and then recycled so local farmers can use it to water their crops. The by-product that remains at the end of the process, which emits almost no smell and has a consistency of moss, is then trucked back to Four J Farms, where employees then scatter it to use as animal bedding. The companies’ representatives who were on hand for a public tour for the media noted that the system is in operation 24 hours a day, seven days a week. It is not the most attention-grabbing project, and certainly is more olfactory than some guests that day would have preferred, but local officials noticed it was more important step in pushing California closer to its 2020 clean energy goals.

“Electricity (to power cars) and hydrogen are getting a lot of media attention these days as the fuels of the future. But it is the workhouse plants like this Calgren facility that reduce the carbon content of our fuel supply,” said Jim McKinney, a project manager for CEC’s Alternative and Renewable Fuel and Vehicle Technology Program. McKinney added that the ethanol produced at this plant results in the lowest carbon-emitting ethanol currently refined at an industrial scale throughout California.

More biorefineries such as the Calgren plant could help California solve multiple challenges — a boost in production of clean transport fuels, the reduction in agricultural waste and for local residents, better air quality in the San Joaquin Valley. “There is enough organic waste (in California) to power 2 to 3 million homes or to generate 2.5 billion gallons of clean, ultra-low carbon transportation fuels,” said Regenis Vice President Bryan VanLoo. Furthermore, Steve Dvorak, President of DVO, reminded the audience that one cow alone creates about 100 to 130 cubic feet of biogas a day, or the equivalent of 65,000 BTUs or 6 kilowatt-hours daily. California’s dairy industry is not going away anytime soon, so plants like that of Calgren’s can help diversify the economy while mitigating the dairy farms’ environmental effects. But before one visualizes a biodigester at every pasture, keep in mind how long this project took: first conceptualized in 2009, it was painstaking process before the plant finally opened two weeks ago.