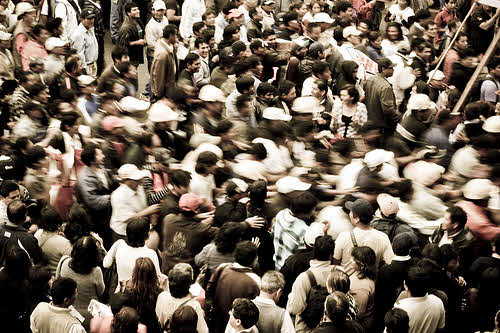 There’s been a strange new outbreak of hand-wringing “baby bust” stories in the media recently, most notably fed by right-wing author Jonathan Last, author of the new book, What to Expect When No One’s Expecting: America’s Coming Demographic Disaster. Clever title, silly book.

Last makes the typical arguments that we’re all familiar with – we’re running out of babies, it’s the fault of birth control, abortion, working women, college educations, secular socialism, modernity in general, car seats, et cetera. (No, I’m not joking about the car seats.) If we don’t boost the birthrate, he says, the United States will continue its supposed slow spiral toward doom. It’s the perfect articulation of Ponzi demography – the idea we need never-ending population growth to support the people already here.

Last is correct on one account – the United States is growing older. (You can thank us bountiful and aging Baby Boomers for that.) We will need to make adjustments in order to have a healthy economy in the coming years. But running out of people? That’s crazy talk. The United States population is expected to pass 400 million by 2051. That’s 85 million more people who will need good jobs, sufficient space, clean water and energy.

So what would happen if the world population – including in the United States – just kept growing to feed the Ponzi scheme? It’s simply not sustainable. The costs to both people and our planet would far outweigh the benefits. Here are some facts Last and his friends simply can’t hide under their pro-growth rug:

Water Resources are Already Stressed: According to the World Health Organization, one in three people around the globe is already being affected by water scarcity, and that number will only grow along with our global population. Even here in the United States, a number of Western states that rely on Colorado River water are watching their supply shrink thanks to population growth and drought. Climate change is expected to make things worse.

Feeding Everyone Will be a Huge Undertaking: Worldwide, the United Nations estimates that we must raise food production 70 percent to feed 9.3 billion people in 2050. Adding to the challenge: The best cropland is already in production. The “Green Revolution” has slowed down. Returns on using more fertilizer have been diminishing and are subject to rising oil prices. And plants can’t grow without water, of course.

We’re Losing Wildlife Habitat: Population growth doesn’t just affect humans. Wild plants and creatures are harmed when land they inhabit is plowed under to grow food, extract minerals and build more roads and houses. In fact, 1,500 plant and animal species are endangered or threatened in the United States alone. Globally, some of the most biodiverse areas are also experiencing the most rapid population growth. We may lose species forever even before they’ve been formally discovered.

Growing Population Means People Suffer, Too: And rapidly growing populations don’t just hurt plants and animals. They hurt people, too. Most of the places around the world with the highest birthrates – Afghanistan, Niger, Yemen, Uganda – also have very high levels of maternal and child mortality and low levels of women’s education. In general, they are extremely poor, and they are plagued by violence. Women’s lives have improved as the birth rate has gone down. Is it really necessary to reverse that trend?

So while feeding the Ponzi demographic scheme might pay off for Pampers shareholders, in the long run, population growth is good for no one. Not even Jonathan Last. Though I doubt we’ll ever convince him of that. But we’ll certainly keep trying!