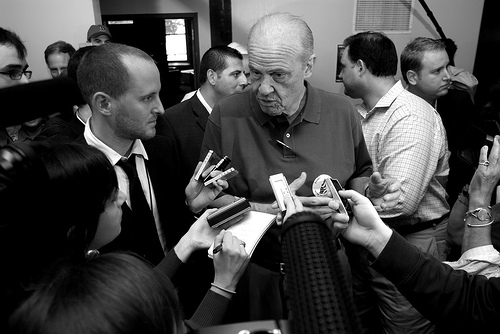 Fred Thompson, A/K/A District Attorney Arthur Branch on NBC’s Law & Order is truly a ‘Law and Order’ kind of guy. I don’t mean that he is a left-leaning humanitarian like his former L&O co-star Sam Waterston. Thompson is more the Law and Order in the Richard Nixon mold.

Thompson is better known for his 5 seasons on Law & Order than he is for his 8 years in the US Senate. It was an 8-year stint for Thompson as he finished 2 years on Al Gore’s term, when Gore resigned his seat to become Vice President. Thompson was elected to a full term in 1996. Thompson has acted in 2 dozen movies and countless televison shows. He has been married twice and is father to four children.

Thompson ‘toyed’ with the idea of running for President for several months during this summer. He finally announced his candidacy on September 5th on the Tonight Show. During the next few days after his announcement, Thompson went on an announcement tour that included 2 days in the Granite State. It was very opportune meeting him up here, as he has spent much less time in New Hampshire than has any other active candidate. I met him in Manchester at a small event.

I asked Thompson about making America energy independent. His reply, “Our dependence on foreign oil threatens our national security. We have to become more energy independent by increasing domestic drilling for oil.”

I followed up with a question about where would he increase domestic drilling. He said, “We certainly can drill in Alaska in ANWR; I am absolutely convinced that we can do that without environmental damage. We should also look to drilling on the Outer Continental Shelf.”

Searching Thompson’s website, there is a brief paragraph with 4 bullet points discussing energy independence. His website relates that Thompson believes that “our climate is changing – but we don’t know for certain how or why.” His website encourages increasing domestic oil supply, reducing demand and using diverse sources of oil.

Let’s give him credit, however. His website encourages “investing in renewable and alternative fuels” and he also promotes “reducing CO2 emissions.” His actual plans are, unfortunately, short on substance on these particular issues.

So what else does Thompson support?

Thompson’s campaign is virtually non-existent in the Granite State. In October, shortly after he announced, Thompson peaked in a NH poll at 10%. However, since November, there have been 13 Republican polls taken of likely voters in NH and Thompson has scored from a high of 7% down to a low of 2%, averaging 4% through these polls.

Thompson appears to have made the unfortunate decision that his campaign would be better off spending time in Iowa and among the southern tier of states rather than wooing Granite State Republicans.

Based on the polls and the ‘conventional wisdom,’ it appears (with apologies to Curtis Mayfield) that “Freddie’s (campaign is) Dead.”

Next week: Our look at the last candidate, US Senator Hillary Clinton, Democrat of New York