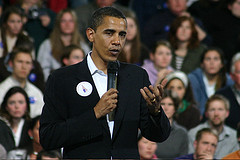 Editor’s note: This week, SmartPower communications director Mike Garofalo takes a look at the energy and environmental positions of one the leading candidates in the Democratic field: Senator Barack Obama.

Senator Barack Obama is the junior US Senator representing the state of Illinois in the US Senate. He was elected to the Senate in 2004 and is serving in his first term. Previously, Obama had served as a 3-term Illinois state senator. Barack is married to his wife, Michelle, and they have two young daughters.

Obama, even as a freshman US Senator, is in the ‘top tier’ of Democratic candidates for President. He has visited New Hampshire more than 20 times, spending more than a month’s worth of time traveling across the Granite State. He has been virtually in every corner of this state bringing his messages of hope to Democratic and Independent voters here.

Obama’s reputation for delivering passionate speeches full of hope and promise is legendary. He is often compared to Senator Robert F. Kennedy for his ability to inspire and motivate those who hear him. But for all his inspirations and hope, Obama appears to be a man of great contradictions, at least as far as renewable energy issues are concerned.

I caught up with Senator Obama in mid May traveling through NH’s seacoast area. At a town hall meeting, I asked him, as I have asked all of the candidates, about his views on promoting clean energy. Obama’s response, “I have been leading the bipartisan effort to raise CAFÉ standards and to promote the development and use of hybrid cars.” Well, raising CAFÉ standards is a good idea and hybrid cars are great but I really wanted some depth (and inspiration) from this man.

I followed up with my usual follow-up question about how can we make America more energy independent and he replied, “I am also working on a bipartisan effort to produce more clean coal.” Not quite what I had hoped he would say. His candidacy and his campaign positions offer some opposing views.

Last month, Senator Obama unveiled details of an ambitious energy policy, right here in New Hampshire. Unlike in most of the presidential debates, clean energy is a real concern of the voters here, so announcing his plan in NH made sense. Senator Obama supports:

Senator Barack Obama is a man full of hope, promise, and complicated positions and beliefs. He is a compelling candidate, with some really strong environmental beliefs. But in his short political career, his positions on a variety of issues have changed, and so has he.

As David Bowie might sing, “Time may change me, But I can’t trace time …”

SmartPower — The national, non-profit marketing organization that is leading the creation of a voluntary market for clean energy and energy efficiency.