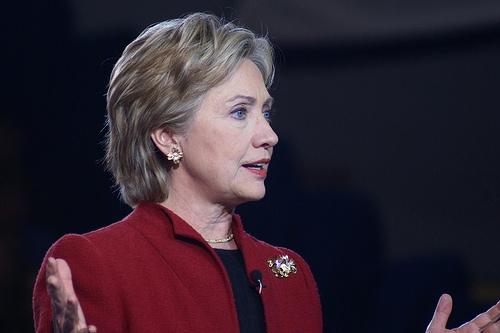 Senator Hillary Rodham Clinton is a Democrat and the junior US Senator from the state of New York. She is serving her second term in the US Senate. Hillary, as everyone in world probably knows, was the Former First Lady of the United States. She is married to Former President Bill Clinton and they have a daughter, Chelsea.

Senator Clinton has been the perceived front-runner in the Democratic primary since she entered the race. Although, even in New Hampshire where support among registered Democrats remains high for both her and the former President, the race is tightening as we approach the January 8th primary.

She has been to the Granite State on many occasions, and she has brought Bill with her on many of her trips. Her political campaign in NH is heavily populated with Democratic activists and party officials who supported her husband and now support her.

In May, I met Senator Clinton in Manchester and asked her about the role of clean energy in her Administration. Clinton said, “I want to invest in clean energy technologies, and to establish a national program to reduce global warming and increase our fuel efficiency.”

When I followed up with a question about energy independence, she answered instead about climate change, “The United States must be a leader in international efforts to address the problem of climate change.”

Hillary has one of the most comprehensive energy plans of all candidates but she didn’t release it until just last month. John Edwards, Barrack Obama, and Dennis Kucinich all released comprehensive plans earlier than she did but her’s encompasses many more aspects than probably all the others combined.
Her plan states:

Hillary’s plans are very comprehensive and well-detailed, just like her candidacy. But will her support of nuclear power and ‘clean coal’ break the hearts and cost her the support of the environmental community? That remains to be seen. But with less than 3 weeks to go, and with lots of snow on the ground, the presidential primary is heating up New Hampshire.

I have really enjoyed covering the candidates views on clean energy and energy independence for both the Green Options blog and for sustainabog and I want to thank David and Jeff and everyone who makes this all possible.

I’ve done my job; now it’s up to the voters to decide.

SmartPower – the national, non-profit marketing organization that is leading the creation of a voluntary market for clean energy and energy efficiency.