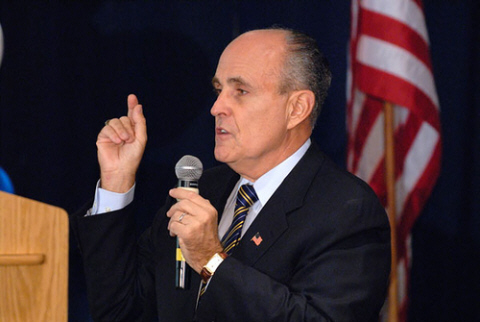 Former New York City Mayor Rudy Giuliani is one of the ‘top tier’ candidates for the Republican nomination for President. Rudy served as Mayor from 1994 through 2001, distinguishing himself in the eyes of many Americans during the national crisis on September 11th. Giuliani had previously served in the Reagan White House, and also as a Public Prosecutor, and in the US Attorney’s Office.

On the campaign trail in New Hampshire, only next-door (Massachusetts) neighbor Mitt Romney has made more trips to New Hampshire than Giuliani has. Rudy has campaigned in every corner of our state.

When I asked him about what forms of clean energy he favored, he seemed ambivalent – “We need to look into cleaning coal. Wind and solar energy today are just too inconsistent.”

While on the stump that day, Giuliani spoke about how energy independence was a critical component of our national security. He begrudgingly acknowledged that global warming is occurring and that we are probably exacerbating the problem but it is not a staple of his stump speech. While he doesn’t run from the topic when asked, he doesn’t offer it without provocation.

So what are Giuliani’s plans for Energy Independence?

While he recognizes that climate change is a problem, he opposes mandatory limits on greenhouse gas emissions. He falls back on the old argument that “if China and India are not restricted, then our contribution will be minor.” (Where is the leadership?)

Surprisingly, regarding renewable energy, Rudy said, “Renewable sources of electricity, including solar, wind, hydroelectric, and geothermal power, will play an important role in our move to energy independence.”

However, I do tend to take his comments on expansion of renewable energy with a grain of salt. The reason for that is because he is leading all of the presidential candidates, of both parties, in accepting contributions from people in the oil and gas industry, totaling over a half million dollars already! Not incidentally, his current law firm has represented such companies as Chevron Texaco, Enron, Duke Energy and Pacific Gas and Electric.

Based on current national polls, Rudy may very well wind up being the Republican nominee in 2008. The NH Republican primary voters just might not support Rudy if they keep the sage words of Stephen Stills, ringing in their ears,

“Don’t let the past remind us of what we are not now. I am not dreaming.”

SmartPower – the national non-profit marketing organization that is leading the creation of a voluntary market for clean energy and energy efficiency.