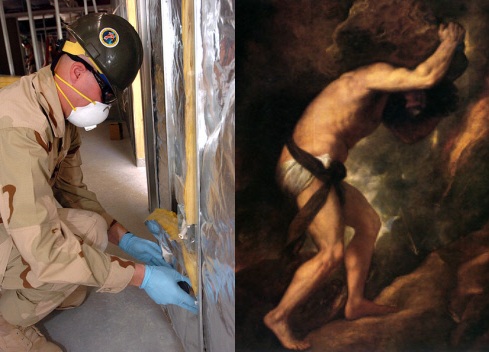 If you’ve increased the insulation in your home, weatherized or replaced leaky doors and windows, and installed energy efficient lighting and appliances, are you now more likely to go out an buy an energy guzzling high-definition television with the saved money? Do you assume “It’s OK… I’m already saving a ton of energy?”

Maybe… maybe not… a number of factors will figure into your decision-making process. But if we assume that many people are doing these same things, isn’t it fair to assume that some would buy that HDTV, or put in that pool? Probably. And doesn’t that ultimately offset the energy and water savings gained by efficiency efforts? Isn’t this a bit like Sisyphus and his rock?

Energy Efficiency and the Rebound Effect

Some of you may already know where I’m going here… I’ve been intrigued by recent discussions on just these kinds of topics appearing at the NRDC’s Switchboard blog (here and here) and the Real Climate Economics blog (here and here) in response to an article from The New Yorker (subscription required), and Breakthrough Institute’s release of a new report which argue that efficiency gains can actually increase energy consumption.

This is an old concept: first incarnated as the Jevons Paradox in the mid-19th century, and then re-emerging as the Khazzoom-Brookes postulate in the 1970s. In both cases, the originators of these ideas argued that energy efficiency particularly was ultimately counterproductive: because efficiency makes energy cheaper (since you can literally do more with less), demand for it rises, and ultimately offsets actual energy savings. Or, efficiency creates greater energy use. Sounds counterintuitive and completely logical at the same time. (And I made up the water parallel — feel free to spank me if its inappropriate).

Now, you might expect those skeptical of environmental efforts to pull these concepts out any time someone mentions efficiency measures as public policy or private effort… but they’re even debated amongst the green crowd. George Monbiot dedicated sizable chunk of a chapter to Khazzoom-Brookes in Heat, and the Breakthrough Institute is an organization founded by Ted Nordhaus and Michael Shellenberger, authors of “The Death of Environmentalism” (which had us all talking 5-6 years ago).

So, this kills arguments for efficiency… right?

So, are efforts to increase energy efficiency ultimately counterproductive? This isn’t just an academic question: much current energy policy is based on efficiency, including a new bill just introduced by Senator Jeff Bingaman.

The short answer: no. Both James Barrett at Real Climate Economics and David Goldstein at Switchboard note that a “rebound effect” (the catch-all term for increasing demand tied to greater efficiency) doe exist, but that it’s far from a complete offset of energy saved through efficiency. Furthermore, both show that the direct line cause and effect relationship grossly oversimplifies the economics of efficiency.

Barret, for instance, digs into David Owen’s claim “that between 1993 and 2005, air conditioners in the U.S. increased in efficiency by 28%, but by 2005, homes with air conditioning increased their consumption of energy for their air conditioners by 37%.” Seems like a good argument for a cause-and-effect relationship, but Barrett notes that inflation, a growth in home size and installation of central cooling systems, and a life span for air conditioners longer than the study period all play into these calculations… and so 1) energy use for cooling air would have been much higher without the efficiency measures, and 2) none of these other factors are driven by air conditioning efficiency (although it may have some effect on the choice of central air systems… probably not the primary driver, though). Goldstein digs into macroeconomic claims, using California’s 27-year policy experiments with efficiency and renewables to demonstrate that not only did the state save energy through these policies, but did so at a greater rate than expected.

Ultimately, this works out to a battle between theory and practical application… while the theory of rebound effects makes sense, in the real world, it doesn’t play out to nearly the degree predicted. I encourage you to read the sources mentioned above, and then share your thoughts. Do energy economics underscore the need for more efficient use of energy… or undermine it?