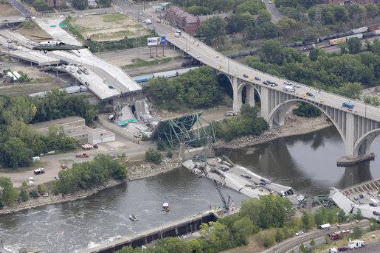 The environmental impact of industrial and residential development became a hot topic after hurricanes Katrina and Rita ravaged the Louisiana coast in 2005, and many called for green rebuilding in the wake of these disasters. On Sunday, the editorial page of the Minneapolis-St. Paul Star Tribune (registration required) presented similar thoughts on transportation development in Minnesota in the wake of the August 1 bridge collapse. The paper’s editor noted that, as the state considers how to best allocate transportation funds after the collapse, taking the environmental impact of new and rebuilt infrastructure into consideration wouldn’t just have ecological benefits: it could also save the state a lot of money, and contribute to economic growth. The editorial took a look westward, to Portland, Oregon:

We know, we know. People are weary of hearing about the green, fuzzy and sanctimonious Oregon city that claims to have found urban nirvana. But, as it turns out, Portland’s environmentally conscious transportation and land-use policies have saved residents a bundle of money while also nurturing a prosperous economy.

A new report from CEO for Cities, a Chicago-based research organization of business and civic leaders interested in the best urban practices, estimates that Portlanders save $2.6 billion a year because they live closer to work, spend less money on gas and, in the process, avoid wear and tear on transportation infrastructure…

The new report, “Portland’s Green Dividend,” notes that metro Portland’s residents travel 20 percent fewer miles per day (about four miles per day less) than Americans living in other major markets. That doesn’t seem like much, but it adds up — and would add to greater savings in the Twin Cities, which is one-third larger. Money not spent on gas is money not sent out of the local market (primarily to big oil companies), leaving Portlanders to invest more in their homes and the local economy, the report says.

The editors note that the Twin Cities are not Portland, so different political and cultural realities would come into play. Furthermore, “Not everyone would choose to live and work near these ‘efficiency corridors,’ nor would everyone choose to take transit.” The fact that many would, though, would provide for less crowded highways, and more money going to local businesses.

Of course, it doesn’t take a collapsing bridge to make people realize that extreme suburban and exurban sprawl, and the “car culture” it spawns, creates a host of environmental and economic problems. The resistance to such “greener” development is pretty strong, though: here in the St. Louis metro area, suburbanites fought against the expansion of the Metrolink light rail system, arguing that it gave “criminals from the city” access to them (because, you know, that’s how criminals operate: they carry away the loot from their crimes on public transportation). The commuter mentality has become very ingrained in the past 60 or so years…

I hope this discussion continues in Minnesota. We all pay for the luxury of a commuter lifestyle, whether we live it or not. The Star-Tribune’s editors have taken the right approach: this isn’t just sustainable development in terms of the environment, but also for economic growth.