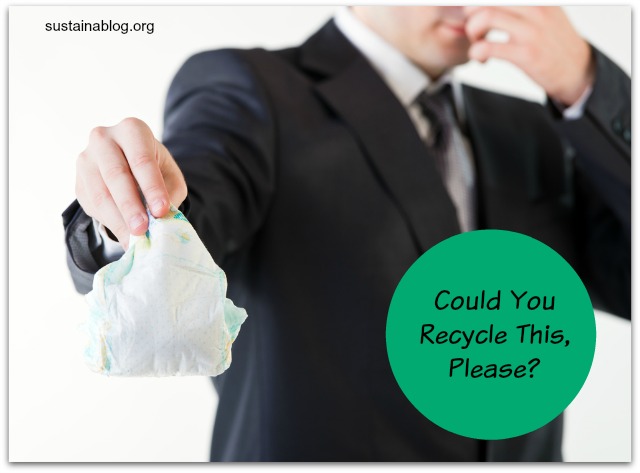 If you have read sustainablog at all carefully, you know that any waste can become raw materials for making useful products. Consider absorbent hygiene products (AHPs) — dirty diapers, adult incontinence products, and feminine hygiene products. They can easily make up 60% of the waste in a household with either babies or incontinent adults. Sanitary issues make recycling them difficult.

Difficult, but not impossible. At least two proven recycling technologies exist. AHPs make an excellent medium for growing mushrooms. And a British company called Knowaste specializes in extracting and selling plastic and fiber from them.

When the waste arrives at a Knowaste plant, it is conveyed to an autoclave and sterilized. Then it is shredded, sorted to remove contaminants, and separated into its plastic and fiber components. The plastic undergoes final steps of being washed and converted to pellets. Then both materials are bagged and sold to companies that make them into useful products.

Because Knowaste deals with only one kind of waste, it can sell a more predictable quality of fiber and plastic pellets than most other recyclers, which handle multiple varieties of plastic and other wastes. Fiber from recycled AHPs can make such products as insulation, cardboard, or cat litter. It is also suitable as an additive to concrete or asphalt.

Plastic can become siding, decking, signs, and especially the bins in which households, day care centers, and nursing homes collect the AHPs.

Knowaste started its research and development of the technology of treating AHPs in the 1990s. It opened its pilot plant in 2011 in West Bromwich, Midlands and announced plans to build four or five more plants before the end of the decade. It closed the Midlands plant in 2013 because it was too small to continue using it.

During those two years, the plant processed 36,000 tons of AHPs each year, enough to fill more than 32 Olympic-size swimming pools. It prevented release of 626 kilograms of carbon dioxide for every ton of waste, or about as much as 2000 individuals generate.

The search for a new, larger site took two years. Knowaste announced plans to build a new, much larger plant in West London in September 2015 and hopes to open it early in 2017. According to its website, Knowaste still intends to build five plants in the UK by the end of the decade. It will also license its technology to countries anywhere else in the world.

Do you know of good uses for any other truly disgusting wastes? Tell us about them in the comments.