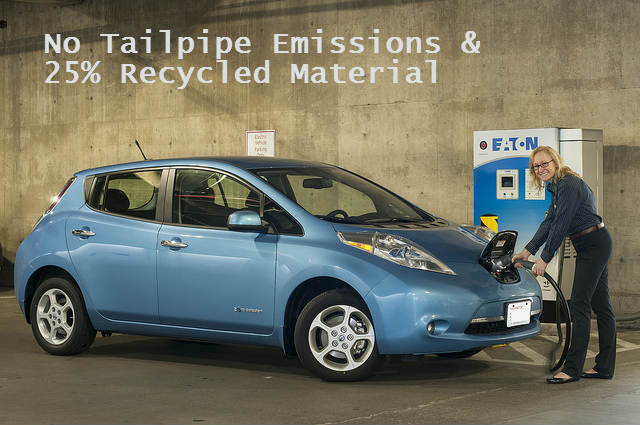 Despite attending recent Ford events, I’m really not a car guy. In fact, my notion of sustainability in terms of car ownership comes down to making the current vehicle last as long as possible… and I’m currently on 12 years with my Pontiac Sunfire. No, it’s not as cool as buying a new hybrid or EV, but given that I don’t drive a lot, this makes much more sense than buying a new “green” car.

When I do go looking for another vehicle, though (and I will, as much as I’d like to think I could make do with my bike and public transportation), I’ll definitely take a look at low/no emission vehicles. And as much as I like what I’ve seen from Ford and GM, I’ll definitely have to take a look at the Nissan LEAF. A recent post from Chris DeMorro at EVObsession puts a few more points in the LEAF’s favor: in addition to a total lack of tailpipe emissions, the LEAF’s also made from 25% recycled materials (including at least one that’s pretty innovative). I’ll let Chris take it from here, though: he is a car guy…

By far the biggest environmental benefit of electric vehicles is the zero tailpipe emissions they produce driving down the road. Yet there is so many other aspects of automotive production that could do with a good scrubbing, and thankfully Nissan hasn’t stopped at electric drivetrains.

This next video highlights some of the many environmentally-friendly features found on the Nissan LEAF that could soon work their way into other vehicles.

It’s true that the LEAF has reduced CO2 emissions by some 151,000 tons since its launch in 2010, and many LEAF owners recharge their cars using renewable, green energy such as solar and wind power. Nissan says some 25% of the LEAF’s material content comes from recycled products including steel, copper, and aluminum. That’s par for course for many new vehicles, though Nissan went the extra step by contacting UBE, makers of recycled plastic pellets, to build the center console of the LEAF.

This is just the beginning though, and we can look forward to a day when all cars aren’t just electric, but sustainably built from start to finish.