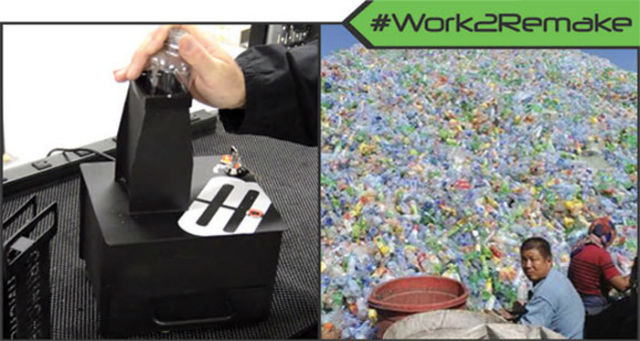 I’m still not sold on the idea that 3D printing is a useful consumer-level technology, but it’s definitely got its uses for designers and researchers. Regardless of who’s using the technology, though, there will be failures. With 2D printing, you can just throw the paper into a recycling bin. With 3D printing, the type of resin used, and the ability to break it down in a useful manner, determines recyclability. And using recycable plastic in the first place makes for a greener process overall.

So, I was intrigued when I came across a press release for The Cruncher, a machine designed to recycle 3D printing fails, or prints that are no longer useful. Created by Extrusionbot, a company that launched its signature EB2 filament extruder through a successful Kickstarter campaign. The new device will work right alongside the earlier product, but can also work with other extruders. In short, The Cruncher breaks down prints and other plastic materials that makes them ready for reuse. Take a look at the new Kickstarter campaign video:

If this just addressed the issue of 3d printing waste, The Cruncher would be a good thing, but fairly limited in its impact. But in addition to turning existing prints and prototypes back into usable plastic pellets, The Cruncher can also process other plastics, like used bottles and other waste materials. That’s kind of exciting… still limited in terms of impact, but conceptually promising. Why not use plastic waste that may well end up in landfills or oceans otherwise?

I’m pretty sure this one’s going to hit its funding goal: it’s already well on the way. It’s clearly designed for use beyond the consumer audience. I like the idea of reuse and recycling as an integral part of 3d printing, and hope not only that this campaign succeeds, but the concept catches on in the niche.

Work with 3D printing? Would a product like this help your efforts? Share your thoughts with us…