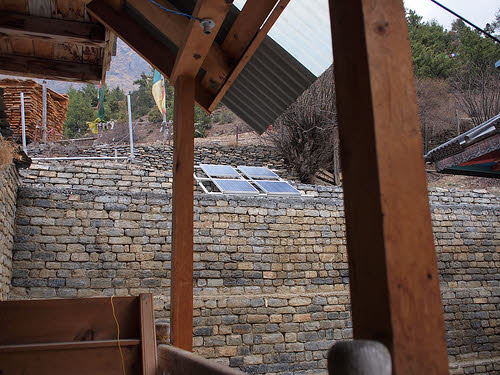 If I asked you to provide a one or two word answer to the question “What do you call a group of people who live together, share work and living space, and power their lifestyle with renewable energy?” you’d likely answer with “commune,” or “ecovillage,” or maybe even “intentional community.” “Monastery” or “convent” probably wouldn’t come immediately to mind, but perhaps they should: like their earthier brethren, numerous religious communities are now powering at least a portion of their buildings and groups with solar power.

The reasoning for this choice often involves a dedication to “creation care” by the men and/or women of the community, as well as the order/organization to which they belong. There may be more practical reasons for going solar, as well: a purchased array of solar panels will eventually pay for itself and deliver “free”energy. If there’s an excess of electricity created, the community may take advantage of net metering options, or even sell the power to nearby homeowners and businesses. A solar lease, on the other hand, can fix electricity costs for a long term, ensuring savings on utility costs. Monks and nuns are like the rest of us in one sense: they’re not interested in paying any more for power than they have to…

Thankfully, as Zach Shahan notes in on Cost of Solar, the cost of solar panels have come down quite a bit and solar can save money in the not-too-long run. After digging around a bit, I’ve discovered these 14 religious communities that are powering themselves (at least partially) with the sun. If you know of others, tell us about them.

Benedictine Abbey of Christ in the Desert: Solar power was a true no-brainer for these New Mexico-based monks: the abbey is fifteen miles from the nearest power line. Their solar array is just one of a number of sustainable systems integrated into their complex.

Benedictine Sisters of Perpetual Adoration: The Tuscon, Arizona-based nuns have been using small-scale solar power for a number of years; their newest array powers much of their facility.

Carmel of the Most Holy Trinity: Within the Notting Hill neighborhood of London, these Carmelite nuns replaced an aging gas boiler in their Victorian-era convent with a solar hot water system.

Franciscan Monastery of the Holy Land in America:  Electrical engineering students from the Catholic University of America installed a solar energy system to power the Franciscan brothers‘ greenhouse heaters.

Gaden Jangtse Norling College Monastery: Originally founded in Tibet, and now located in India, this Buddhist monastery has used solar hot water systems for over 20 years. The original solar heaters were replaced in 2008.

Monastery of Our Lady in the Desert: Yep, the US Southwest in well-represented on this list (which make total sense)! Another Benedictine organization, these sisters had a solar air heating system installed just last year.

Mount St. Mary’s Abbey: Here’s the story that got me thinking about this topic. These Cistercian nuns in Wrentham, Massachusetts, needed a source of income that supported their aging population. With 500 acres of land, leasing the space to a solar energy company met the sister’s financial needs and their religious values. They also make candy…

Rumtek Buddhist Monastery: In collaboration with WWF’s Sacred Earth Program, these Buddhist monks have not only installed their own solar hot water heaters, but developed environmental guidelines for religious communities in the Himalayas. Buddhism has strong beliefs for food systems that encourage sustainability and compassion, including organic farming, which these monasteries advocate.

Stanbrook Abbey: Another Benedictine community with deep roots in Northern England, the sisters at the new abbey have implemented a wide-ranging sustainability plan, which includes solar power.

Tintern Abbey: We English majors know this name from William Wordsworth’s poem, but sustainability folks may now want to pay attention: the historic Welsh abbey is now solar powered. Tintern (as far as I can tell) is strictly a historical site at this point, not a working monastery… but this was too cool not to include.

Woodside Priory: Primarily a boarding school in the Bay Area, Woodside Priory was founded by Benedictine monks who still reside on campus at St. Stephen’s monastery.  The institution went the solar leasing route with SolarCity, which estimates cost savings of over $3000 a month.