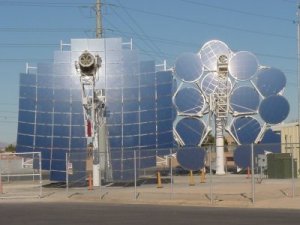 When I lived in Las Vegas in the ’90s, I often wondered why Nevada, particularly southern Nevada, didn’t have more solar energy development. I mean, the sun shines all the time… It looks like Nevada politicians are finally catching on, though (much like their counterparts in Iowa), as renewable energy development has become a central issue of debate in this year’s contest for governor. From Renewable Energy Access:

The race for the next Governor of Nevada is well under way and with all the expected political maneuverings — except one. In a twist on the age-old political contest, renewable energy has become a prominent campaign issue with one candidate announcing major plans and the topic proving itself worth addressing for the others.

The leading Democratic contender, Dina Titus (who, if I remember right, also teaches at UNLV), has outlined an eight-point plan for developing the state’s ample renewable resources. It doesn’t look like any of the other candidates from either party have done anything this extensive, but they’re definitely talking about the issue, if only to respond to Titus’ proposal. The one thing I’d love to see in Titus’ plan, and hear others discuss, would be distributed generation. With the number of new buildings going up southern Nevada, there’s no reason that the state couldn’t encourage installation of solar panels and/or windmills with this new construction. Nevada, or most other states, don’t need huge installations to get renewable power growing — they can focus on encouraging homeowners, businesses and builders to incorporate renewable technologies into existing and new structures and make a real difference.