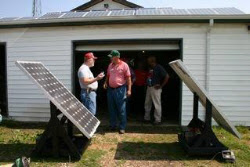 OK, on it’s face, that sounds like a ridiculous assertion: what does one thing have to do with the other? For St. Louis’ Rev. Larry Rice, the answer is “everything.” Rice, the founder of the New Life Evangelistic Center, and a passionate advocate for the homeless, believes that training people who’ve fallen on hard times in renewable technologies may provide them with a ticket to gainful employment and self-sufficiency.

Today’s Wichita Eagle points to another effort by Rice to promote renewable energy in Missouri while helping the homeless. The Southwest Missouri Energy Center, just outside of Marshfield, offers a two-year training program, along with housing, that’s designed to provide homeless people with the skills they need to participate in the green economy. At the center, trainess don’t just learn to install “off-the-shelf” items like solar attic fans: they’re also encouraged to experiment using materials at hand:

Built from scrap wood, [center volunteer Hank] Zeniewicz said, are solar stills that produce potable water by using the sun to heat water that evaporates onto a glass cover and flows into a container.

The center even has a solar-powered tractor created by removal of the engine and the bolting of an electric motor to the transmission, with power to a bank of batteries supplied by solar panels attached to the fenders.

It doesn’t move quickly, but is powerful enough to pull a wagon and do other chores, [center worker Chris] Allison said.

Much of the center is still in the works, including a biodiesel laboratory, a dormitory for students in the training program, and a visitor’s center. The Marshfield center won’t be as large as the existing Missouri Energy Center in New Bloomfield (where Zeniewicz got his start with the program — he was a laid-off auto worker), but will provide many of the same services.

Long-time readers of sustainablog know I’ve been fan of Rice’s work for quite some time: while “creation care” is still a hotly-debated topic in evangelical circles, Rice and his followers are demonstrating on a daily basis that environmental stewardship and economic empowerment can work hand-in-hand. The Missouri Renewable Energy website that the New Life Evangelistic Center started several years ago has been upgraded, and now features some of Rice’s media programs on renewables, as well as his writing on creation care, and information on the activities going on at the three renewable energy centers around the state.