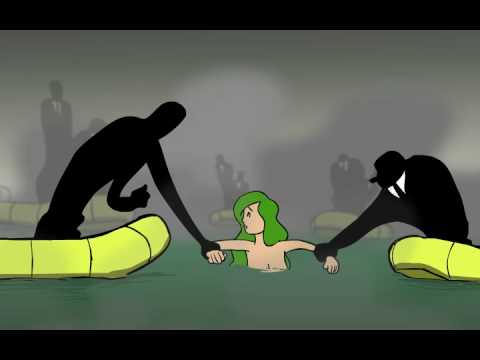 Copenhagen is a water town, and the iconic symbol of Denmark’s capital city is the Little Mermaid silently standing watch over the harbor. Next month the Little Mermaid welcomes the global community coming to negotiate at least the foundation of an international treaty at the COP15 climate conference to carry beyond the Kyoto Protocol expiring in 2012.

The Little Mermaid takes her role as a symbol of climate change seriously. And she’s angry. Angry because also coming to her town are thousands of lobbyists and business (as usual) representatives intent on holding back progress for a dangerously warming world, opting instead for short term profits over long term sustainability.

The Little Mermaid is now the Angry Mermaid:

“So the Angry Mermaid decided to launch an award – in her own name – to highlight how corporate lobbyists were scheming to sabotage action to save the climate. She asked people she knew if they could suggest which companies were doing the most to undermine climate action – and she decided to publish a shortlist and ask the public to vote.”

The Angry Mermaid award was organized by Attac Denmark, Corporate Europe Observatory, Focus on the Global South, Friends of the Earth International, and Spinwatch.

The list of candidates eligible for receiving the Angry Mermaid award was whittled down to eight – and the nominees are:

Help the Angry Mermaid decide the winner and vote for your choice of climate change action saboteur. Voting is open until December 13.