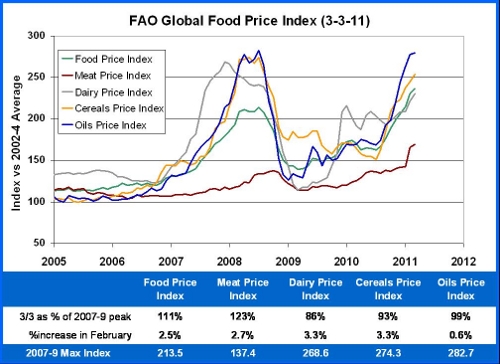 Last month I started a series of monthly updates on the rising prices of food in international trade.  As you can see from the graph above, the trend is continuing so that it looks like we are likely to see prices as high as the previous spike.  It is important to note that these indicies do not reflect what prices consumers will pay in any particular country because that is also influenced by many other factors:

This trend is not an indicator of hunger.  That is a much more complex issue.

What Will This Mean

Those of us who live in major food exporting nations like the US, Canada, Australia… will see slightly higher food prices because grain prices are high. Since we spend a very small part of our income on food, it won’t be that painful.  Many European countries are major importers of wheat for bread and pasta, so they are already seeing noticeable price increases.  Europeans also import a great deal of animal feed so their meat and dairy prices will rise.  Still, these are relatively rich countries that spend a small portion of their income on food.  Most people in the rich countries will feel the pain of high oil prices much more than food.  It is poor people in highly trade-dependent countries who will actually suffer from this phenomenon.

One question is whether the current trend is another new spike like 2008 or actually a resumption of the first spike that was only postponed by the global recession.  Will the likely increase in farm production this season reverse this trend?  We really won’t know until this fall’s harvest.

You are welcome to comment here or to email me at feedback.sdsavage@gmail.com

Ready to upgrade the wardrobe for Spring? Check out our listings of women’s clothing, including skirts, shorts, t-shirts, and jeans.