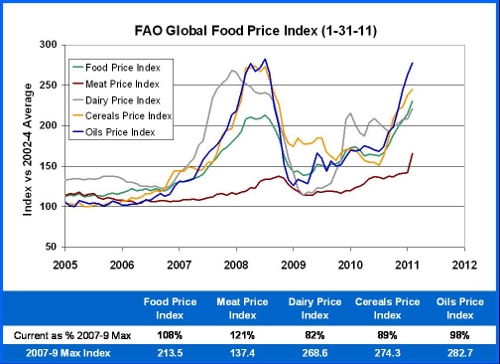 The chart above shows that global food prices, as measured by the FAO indicies, are spiking, much as they did in 2008.  At the end of January,  the overall food price index had just surpassed the 2008/9 peak, while the indicies for dairy, cereals and oils were closing in on the previous maximum.  The meat price index  is moving up much more dramatically than in 2008.  There was a long period prior to 2008 with no such food prices spikes, but we have every reason to believe that the drivers are in place to make these events common future occurrences (rising population, rising living standards in Asia, high energy costs, biofuel demand, and climate change).

What does that mean to you?

Well, frankly, since you are reading this on a computer, it is very likely that you are “rich” compared to a large percentage of the world’s population. If the trend is like last time, this price swing will only raise your food expenses by ~5%.  If you are a typical person in the developed world, your family spends 10% or less of the family income on food (that includes food prepared outside of the home).   This crisis is not about you.  The tragic consequences of this trend will be felt by poor people in countries dependent on imported food.  Worst affected will be countries like Northern Africa, the Middle East, and also some poor countries in Asia and Sub-Saharan Africa.   Many families in these regions spend 40% or more of their income for food so these price shifts are devastating.  Food shortages and high prices can also spark political instability.  High food prices already have contributed to the overall discontent that is driving uprisings in the Arab world.  It can also lead to protectionist actions by governments and speculative manipulations.

Farmers will, of course, respond by increasing production.  Crop yields have been steadily rising over time, but when commodity prices go up, growers have some options they can employ to take production even higher.  As an example, consider wheat growers. They can plant fallowed land or harvest (rather than graze) a crop.  They can buy new, certified wheat seed rather than use saved seed.  They can spray to prevent insect or disease losses that they might have tolerated at low commodity prices when the additional yield gain would not have paid for the treatment.  In the last spike, there was a jump in sales of crop protection chemicals driven by high crop values.  When this happened in 08, some commentators falsely attributed this increase to GMO crop planting when it was just simple grower economics. The old saying has been that “the best cure for high commodity prices is high commodity prices.”  Farmers will most likely reverse this current supply issue, but it is likely to be harder and harder for them to do so in the future.

Why Write About This?

I will post on this situation at the beginning of each month when the FAO index is updated.  I am not trying to be alarmist, but I do believe these issues deserve more attention from the public and policy makers.    This issue is definitely in the news, but not prominent (no surprise with what is happening in Egypt etc).   Type “food prices” into Google Trends and you will see that people with computer access are not yet tracking this issue like they did during the peak of the previous spike.

A looming food crisis should motivate us to have the following difficult and complex discussions:

1. International investment in agricultural research for the 3rd World has declined dramatically in recent decades, partially because of distorted characterizations of the plusses and minuses of the “Green Revolution.”  Is it time to reinvest in that research so that more countries can move towards food self- sufficiency and be less dependent on trade? (particularly for sub-Saharan Africa).

2. Should the big food exporting countries (US, Canada, Brazil, Argentina, Australia…) simply sell their grain to the highest bidder, or should there be policies/standards based on humanitarian and/or strategic considerations?

3. To what extent should a country “export its water?” (this is an active discussion in Australia)

4. Should major food importing countries in the EU consider adopting some biotech crops? This would increase their domestic production, thereby reducing their competition for food in the global market.

5. How much of our food crop resource should be devoted to biofuel production (palm oil, corn, soy…) and what are the trade-offs in terms of energy independence, fuel prices and emissions?

6. If government market-modifications (like the US blenders credit for ethanol) are going to be employed, is there a way to use them to encourage the transition to cellulosic biofuel using less food-competitive sources?

7. Can we come up with new models for agricultural land leases to make long-term investment in soil health something that works for our farmers who rent so much of the land they farm? (The ideal requires a 4-6 year transition to continuous no-till with cover cropping, controlled wheel traffic and precision, variable-rate fertilization.  We know this combination of practices builds ultimate yield potential and yield stability of a field, but a grower has to be able to know that he/she will get the benefit from this long-term investment and risk in order to make such a major commitment.)

I’ll post an update in early March.  You are invited to join the discussion about these and other  questions here or to email me at feedback.sdsavage@gmail.com and I will summarize in the next post.

Looking for a green gift for a newborn? Check out our wide selection of eco-friendly baby products, including blankets, feeding sets, and organic diapers.