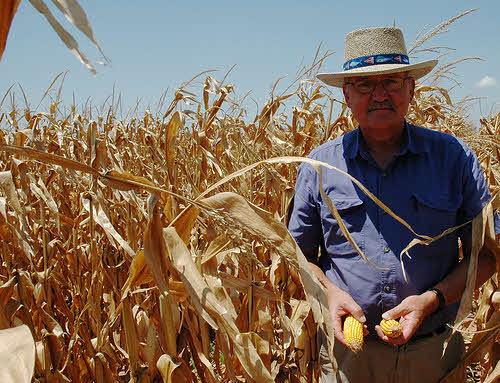 Over the last two months, the price of corn has been climbing. On July 19th, it exceeded $8 per bushel for the first time, taking the world into a new food price terrain. With heat and drought still smothering the Corn Belt, we may well see more all-time highs in coming weeks as the extent of crop damage becomes clearer.

This is not the way it was supposed to be. This spring, farmers planted a record 96 million acres of corn. An early spring got the crop off to a great start, leading the U.S. Department of Agriculture (USDA) to project the largest corn harvest in history.

On June 12th, the USDA projected the U.S. harvest would hit a record 376 million tons. But the drought conditions that had initially been confined to the country’s southwest began to spread and intensify. In its next monthly report on July 11th, the USDA reduced its projection to 329 million tons of corn, down by 12 percent or 47 million tons. This was a huge drop in only one month. Yet in the end the actual decline may be closer to 30 percent, or roughly 100 million tons—double the USDA estimated drop. (See data.)

Because the USDA is overestimating the harvest, it is underestimating the food price rise in the months ahead. Even as corn prices are setting all-time highs, so too are soybean prices, putting still more upward pressure on food prices.

Why this Year’s Corn Crop will be Smaller than Predicted

There are several reasons for the large reduction in the harvest estimate. One is record high temperatures. Nationwide, the first half of this year was the hottest on record. Thousands of record daily temperature highs were set locally. In St. Louis, Missouri, which is in the southern part of the U.S. Corn Belt, in late June and early July there were 10 consecutive days with temperatures of 100–108 degrees.

Timing and distribution of rainfall also helped determine the corn crop’s destiny. The summer of 2012 was one of below normal rainfall in the Corn Belt, especially the central and eastern parts. The combination of high temperature and low rainfall led to the rapid spread of drought. During May and early June, the drought was concentrated in the southwestern United States. But the dryness in the Southwest kept expanding into the Midwest and the Upper Great Plains until, by the end of July, drought covered 63 percent of the country—the most extensive in half a century. (See map.)

When the thermometer rises above the norm, plants suffer. As a rule, as the temperature rises to 68 degrees Fahrenheit, photosynthesis increases. From 68 to 95 degrees it remains steady. Beyond this it declines fast. At 104 degrees, photosynthesis ceases entirely. At such elevated temperatures, plants go into thermal shock.

Intense heat also disrupts pollination. Corn is particularly vulnerable because of its complex pollination system. The tassel at the top of a corn plant releases pollen, which must fall on each strand of silk coming out of the ear of corn and travel to the kernel site, where fertilization occurs. If it is too hot, the silk will turn brown and dry out, leaving the pollen with no chance of reaching its destination.

This year’s drought has taken a crop that started out nearly as good as it gets to one where the USDA rates only 23 percent of the crop to be in “good” to “excellent” condition. The last time the crop deteriorated so badly was in 1988, when heat and drought combined to shrink the harvest by 39 percent.

US Corn and the Global Impact

What happens to the U.S. corn crop, which accounts for nearly 40 percent of the global harvest, concerns the entire world. Of the big three grains—corn, wheat, and rice—the corn harvest is now by far the largest, totaling near 900 million tons compared with less than 700 million tons for wheat and 460 million tons for rice. Wheat and rice are the world’s food staples, while corn is the feedgrain for livestock and poultry.

Although people do not eat much corn directly, a huge amount is consumed indirectly. Much of the food in the refrigerator—milk, cheese, hamburger, eggs, yogurt, and ice cream—is produced with corn. The rise in corn prices this summer will boost food prices as high-priced corn works its way through the beef, pork, poultry, and dairy production cycles. 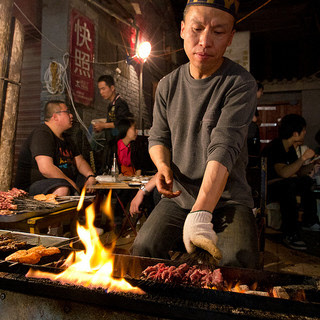 One consequence of fast-climbing corn prices is that people will find themselves moving down the food chain. Many of the 3 billion people in the world who are currently moving up the food chain, a big chunk of them in China, may suddenly find the price of livestock and poultry products rising much faster than their incomes, forcing them to cut their meat consumption. In the months ahead, we are likely to see more people moving down the food chain than at any time in history.

When the price of one of the big three grains goes up, the prices of the other two typically follow. With wheat and rice prices now also rising, hunger will spread among the world’s poor, reducing many more people to one meal per day.

The current rise in corn prices comes at a time when grain prices are already elevated. Even before this summer, grain and soybean prices were double those of six years ago. So we are now going from high prices to even higher prices—and these will almost certainly translate into spreading food unrest.

This year’s record crop shortfall is part of an overall loss of momentum in the effort to expand food production fast enough to keep up with the record growth in demand of recent years. As a result, world carryover stocks of grain will likely fall from over 100 days of consumption 15 years ago to a precariously low 65 days of consumption for this year.

In the face of tightening world grain supplies, some exporting countries may well restrict exports, as Russia and Argentina have done in the past. This could create panic among importing countries, heightening the pressure to acquire even more land abroad on which to produce food for themselves. It is now every country for itself.

We are looking at a future of rising food prices driven by rising temperatures. Heat waves and droughts like that of 2012 in the United States are projected to become more frequent as the planet heats up. Atmospheric levels of carbon dioxide (CO2), a heat-trapping gas, have increased 20 percent since 1970 and are continuing to rise.

A report published by the U.S. National Academy of Sciences concluded that if atmospheric CO2 climbs from the current level of 391 parts per million (ppm) to above 450 ppm, the world will face irreversible rainfall reductions in several regions. The study likened the conditions that will develop to those of the U.S. Dust Bowl of the 1930s. Already the world’s drought-afflicted area has expanded from below 20 percent of total land area a half century ago to closer to 25 percent in recent years.

In generations past, when there was an extreme weather event such as a monsoon failure in India, a severe drought in Russia, or an intense heat wave in the U.S. Corn Belt, we knew that things would shortly return to normal. But today there is no “normal” to return to. The earth’s climate is now in a constant state of flux.

With temperatures rising and with droughts expanding and intensifying, it is becoming ever more difficult to ensure future food security. Climate change is now reducing crop prospects. Restoring an acceptable balance between food supply and demand now goes beyond agriculture. Future food security may depend more on new energy and population policies than on any agricultural policy we can conceive.

Lester R. Brown is President of Earth Policy Institute and author of Full Planet, Empty Plates: The New Geopolitics of Food Scarcity, due to be published in October 2012. Data and additional resources at www.earth-policy.org.