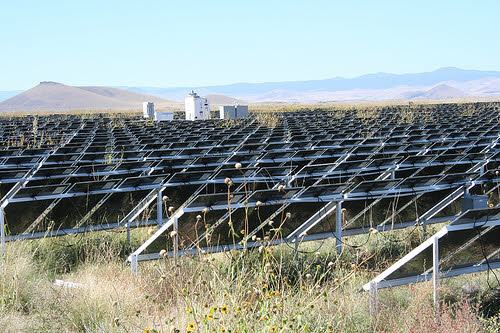 A number of towns around the country have put their bid in for “capital” of particular renewable energy technologies: Rock Port, Missouri, for instance, is completely powered by wind, and Reynolds, Indiana was shooting for the title of Biotown USA. Solar’s still competitive on this front, but, today, Riverside, California tossed its hat in the ring for the title of America’s Solar City (or however you want to phrase it).

Yes, Riverside announced plans to add a ton of solar capacity to the local electric utility. But ratepayers don’t have to worry about a jump in their bills in order to pay for a solar collection farm: the city’s contracted with SunEdison to provide 20 MW of solar power for the next 25 years (that’s a power purchase agreement, or PPA, for those of you who like the technical terms). The solar power provider will build a plant for collecting sunlight on previously disturbed land (so there shouldn’t be issues with native species) that’s also well-situated for the current transmission infrastructure.

I’m not aware of  other towns making this kind of commitment to solar (but please correct me if I’m wrong). The beauty of this arrangement, of course, is that Riverside doesn’t have to sink a ton of money into infrastructure; it merely needs to buy the power long term at a fixed rate (which should turn out to be a bargain – conventional power rates will go up). There’s a local connection, too: SunEdison is owned by St. Peters-based MEMC – would be great to see a town in our neck of the woods jumping in for this title, also.

Know more about other municipal solar projects than I do? Feel free to show me up: share your thoughts and news…