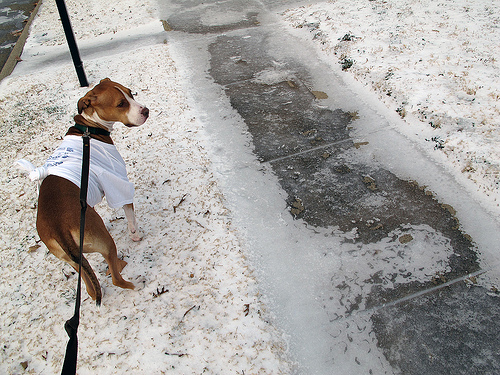 We love quick fixes. On oh-so many levels, we try to quickly and easily fix something without thinking ahead to the potential longer term problems that often result from the quick fix solution. You can throw rock salt into that very broad category, since it is the number one preferred quick solution for melting ice on driveways, walkways, roads, and all sorts of walking and driving surfaces.

But there are serious long term problems that can accumulate along with all of that rock salt you are throwing on your driveway. Instead, you should consider some of these alternatives to throwing rock salt on your icy driveway this snowy season.

What are the dangers of using rock salt on icy paths?

Icy paths can be dangerous and force us to take it slow. Millions of tons of rock salt (most commonly, sodium chloride) are dumped across the country on an annual basis to help melt ice more quickly in colder weather. But what is the reason for concern about using all of this rock salt?

The problem is that all of that excess salt can build up in the soil over time and can prevent plants from absorbing moisture and nutrients, effectively killing vegetation. In addition, salt can also cause metals to leach from the soil, which then enter waterways through drains during rainstorms, causing harm to wildlife down the line. Rock salt can also enter groundwater supplies, polluting drinking water.

In short, all of that salt is not good for the soil, nor our natural water supplies. Chlorides can also cause irritation for the four-legged creatures among us, namely our pets, whose paws are sensitive to salts. Worst of all is that salt only accumulates over time, and the problem can become compounded through heavy spreading.

You probably won’t like to hear the first of the natural alternatives to using rock salt, and that’s because it means you must shovel snow and ice before it can accumulate. Do not let snow and ice sit on your driveway or sidewalk, because it will have the opportunity to become more dangerous over time.

In cases where it is not possible to remove the snow in time, there are options to improve the traction on a slippery walkway. Unfortunately, even those de-icers marketed as “natural” or “organic” can still contain harmful chlorides. There are several materials that you can spread on a slippery path, including sand, wood ash, sawdust, wood chips, or straw. Use these materials on the most slippery of paths where there is a lot of traffic. None of these materials will actually melt the ice, of course, but they will at least make for a safer walkway.

You can also invest in the proper footwear such as attachable snow-grips to improve your personal safety on an icy road. Be smart and don’t go out walking without a decent pair of boots.

Ultimately, rock salt is a quick fix that only results in increased problems in the future. Instead, be wise and try to keep your driveway and walkways free from snow when it first falls, and improve the traction on already icy paths with natural materials that will not leach into the soil and waterways.