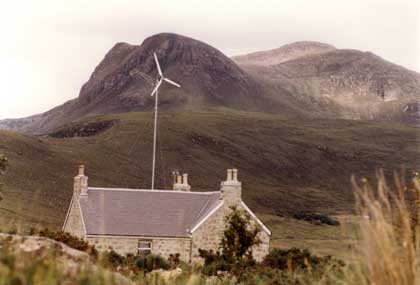 From the UK’s IC Dumfries, a very short article on a pretty significant change in the building requirements for Scotland:

Major building developments will have to generate at least a tenth of their energy needs from on-site green sources under radical proposed new planning rules.

Ministers want housing and commercial developers across Scotland to use “micro-renewables” such as solar power, wind turbines and biofuels to help provide electricity.

The proposal is contained in the Executive’s draft Planning Policy on Renewable Energy and has been billed as the first plan of its kind in the UK.

That’s the article, and I’m having a bit of trouble finding a copy of the draft Planning Policy. Still, even this little bit of information leads to all sorts of speculation, particularly on how directive the government will be in terms of the types of renewable energy used by “major building developments.” Assuming that executive allows builders the freedom to develop their own combination of sources, this could be a very interesting experiment in government and business playing the roles for which they’re best suited: government acting to protect the commons, and business implementing its flexibility and innovation to meet the mandated targets while still producing a profit. I’ll definitely keep an eye out for news on this, as it will be a very interesting process to watch should the draft policy become an official regulation. Not knowing more details, I can’t make too many judgments; on its face, though, I really like this idea.