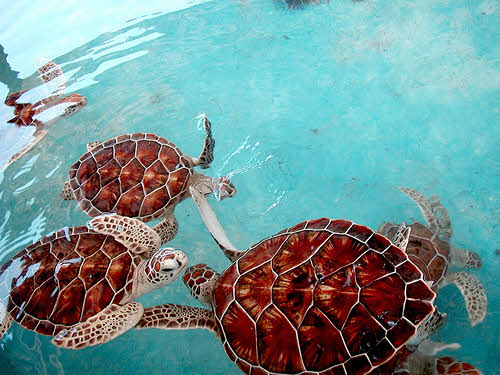 For the past 100 million years, sea turtles have been swimming in the world’s oceans, surviving natural predators, mass extinctions and shifts in the global climate. Found in almost every ocean, these amazing creatures undertake lengthy migrations, traveling around the world to return to the same beaches where they were born to lay their own eggs. Unfortunately, the adaptations that have allowed sea turtles to survive have now met their match: humans. Today, Endangered Species Day, is a day to acknowledge the threats facing sea turtles and start taking important actions to restore their populations around the world.

Every species of sea turtle that swims in U.S. waters is either endangered or threatened with extinction. These turtles face many threats, including nesting beach erosion, coastal development, ocean pollution, and most significantly, harmful fishing practices. In the Pacific, leatherback sea turtles are caught in drift and set gillnets in California that target swordfish and thresher sharks. These nets act like walls of death, indiscriminately ensnaring marine life. The Eastern Pacific subpopulation is listed as critically endangered by the International Union for Conservation of Nature. In the Atlantic, the federal government estimates that more than 53,000 sea turtles are killed every year by shrimp trawls in the Gulf of Mexico and southeast Atlantic.

Fortunately, solutions to minimize these dangers exist. These fisheries should adopt a three-pronged approach to count, cap, and control bycatch. Fisheries must be adequately observed to know how many sea turtles and other non-target marine life are captured and killed. A limit should be established on this level of injury and mortality. Where possible, steps should be taken to control and minimize bycatch over time. These steps can include modifying fishing gear so that it causes less harm to wildlife. In the case of the shrimp trawl fisheries, Turtle Excluder Devices (TEDs) should be properly installed in all trawls so that captured sea turtles can escape. Where such modifications are not enough, certain harmful gears should be prohibited. Replacing drift and set gillnets with harpoon fishing would effectively eliminate sea turtle, shark, and marine mammal bycatch in these fisheries in the future.

Sea turtles play vital roles in their environments, helping to maintain healthy coral reefs and seabeds. With these changes, we can help ensure the survival of these species into the future, for the enjoyment of ocean lovers and the health of marine ecosystems alike.

Amanda Keledjian is a marine scientist at Oceana, the largest international advocacy group working solely to protect the world’s oceans.